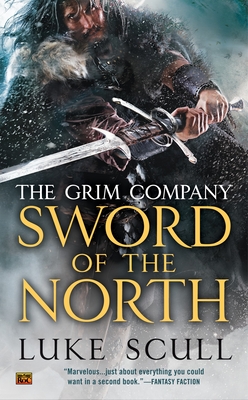 Sword of the North (The Grim Company #2)

In The Grim Company, Luke Scull introduced a formidable and forbidding band of anti-heroes battling against ruthless Magelords and monstrous terrors. The adventure continues as the company—now broken—face new dangers on personal quests…

As Davarus Cole and his former companions were quick to discover, the White Lady’s liberation of Dorminia has not resulted in their freedom. Anyone perceived as a threat has been imprisoned or exiled, leaving the White Lady’s rule absolute. But Eremul the Halfmage has learned of a race of immortals known as the Fade—a threat not only to the White Lady, but to all of humanity.

Far to the north, Brodar Kayne and Jerek the Wolf find themselves caught in a war between a demon horde and their enemy of old, the Shaman. And in the wondrous city of Thelassa, Sasha must overcome demons of her own.

Because the Fade are coming...

Praise For Sword of the North (The Grim Company #2)…

“Luke Scull has a very distinct style and an imagination bursting with intriguing ideas.” —Mark Lawrence, International Bestselling Author of The Liar’s Key

“As with The Grim Company, the writing is incredible, its entirely convincing with a suitably dry, dark humor and excellent use of tension. Luke Scull is a natural storyteller. The action scenes are suitably fast and dynamic and the over-arching story engaging.”—SFBook.com

“[Scull] wields humor brilliantly and keeps the edge between dark and light so keen it is possible to feel hope in the darkest situations whilst also sensing impending doom any time something is going well.”—Fantasy-Faction

“The action in this series so far has been relentless, just the way I like to see it. Fast, brutal and a whole lot of cool.”—The Book Plank

Luke Scull is the author of The Grim Company novels. He is also a video-game designer and has worked on numerous bestselling fantasy role-playing game franchises. He was born in Bristol, England, and now divides his time between the UK and Argentina.
Loading...
or
Not Currently Available for Direct Purchase