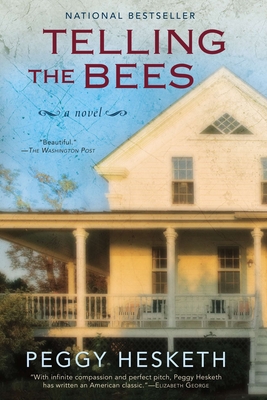 A lifelong beekeeper, Albert Honig is deeply acquainted with the ways and workings of the hives. He knows that bees dislike wool clothing and foul language; that the sweetest honey is made from the blooms of eucalyptus; and that bees are at their gentlest in a swarm. But Albert is less versed in the ways of people, especially his beautiful, courageous, and secretive friend Claire.

A friend and neighbor since childhood, Claire was a hovering presence—and then a glaring absence—in Albert’s life, a change that has never been reconciled. When she is killed in a seemingly senseless accident during a burglary gone wrong, Albert is haunted by the loss. In the aftermath of this tragedy, he is left to piece together the events of their lives to attempt to make sense of their shared past and the silence that persisted between them for a decade before her death. What Albert comes to learn is that Claire’s secrets were far darker than anything he could have imagined...

Praise For Telling the Bees…

“Some have compared Telling the Bees, Peggy Hesketh’s first, stately and beautiful novel to The Remains of the Day, but to my mind it compares to the best of Elmore Leonard. There are murders here but much more than that: a series of glimpses into an entirely different and closed place…in addition to the murder-mystery part of this narrative, the bees add another entirely sweet layer of plot and character.”—The Washington Post

“ELEGIAC AND INTELLIGENT.”—Gordon McAlpine, author of Joy in Mudville

Peggy Hesketh’s writing has appeared in Calliope and Antietam Review; her short story “A Madness of Two” was selected by Elizabeth George for inclusion in the anthology Two of the Deadliest. A longtime journalist, Hesketh teaches writing and rhetoric at the University of California, Irvine. This is her first novel.

Throughout the novel, we learn many details about bees and beekeeping. Did you enjoy this facet of the book? Did you learn anything about bees that surprised you? Why do you think the author chose to have the protagonist be a beekeeper?

Consider the protagonist, Albert. What sort of man is he? What is important to him, both practically and philosophically?

Albert and Claire represent quite different personalities and outlooks on life. Despite their differences, what united them as friends? Whom did you identify with more?

Claire is a vibrant, shining presence in Albert’s life. Her sister, Hilda, though, sometimes fades into the background. What is Hilda’s role in the narrative, and to Albert?

Periodically through the story are references to Claire and Hilda’s older brother, who died as a toddler before they were born. How did this event affect the other characters? What importance does it play in the narrative?

Describe the relationship between Albert and Detective Grayson. Does it change during the novel? If so, how?

The novel takes place over the course of the twentieth century, as both the landscape and culture around Albert transformed dramatically. In what ways does the time period influence the arc of the story? What did you think about the obvious expressions of Albert’s cultural insensitivity as his small world expanded?

Over the course of the novel, Albert comes to realize how little he actually knew about Claire’s life—her ambitions, hopes, and secrets. And yet they grew up together, and he considered her his best friend. What accounts for this gap between what Albert thought he knew and the truth? Was Claire unknowable, or was Albert incapable of understanding her? Or both?

Why do you think that Albert withdrew into the study of philosophy as Claire matured?

How did Claire see the world and her place in it? What was it about Albert’s worldview that ultimately drove them apart?

Did learning the truth about Claire’s secrets alter your perception of her and Albert? Were you surprised? Did this knowledge change your opinion about the argument that led to a decade of silence between Albert and Claire?

Are there any events in the book that to you seemed out of the ordinary, even magical? What about to Albert? How do these events relate to a solitary man such as Albert’s interpretation of the key players and events in his life?

In the houses next door to Albert, the residents take on a mythic quality within the neighborhood—first Mrs. Straussman, renowned among her neighbors for her bad temper, and then Claire and Hilda who are known just as the “Bee Ladies.” Only Albert has had privileged glimpses into the secret lives that took place within. Are there similar houses, or people, in your neighborhood or town? How might your life look to an outsider?