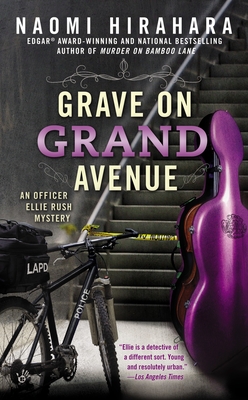 LAPD bicycle cop—and aspiring homicide detective—Ellie Rush is back on patrol in the newest mystery from the award-winning author of Murder on Bamboo Lane.

Ellie stops for a friendly chat with gardener Eduardo Fuentes while patrolling one of Los Angeles’s premier concert halls. A few minutes later she’s shocked to discover him lying at the bottom of a staircase, clinging to life and whispering something indecipherable. Nearby, the father of Xu, a Chinese superstar classical musician, claims Fuentes was knocked down while attempting to steal his son’s multimillion-dollar cello—a story Ellie has trouble believing.

Meanwhile Ellie has issues of her own to deal with—like the curious theft of her car, a 1969 Pontiac Skylark. But after the gardener takes his last breath and Xu mysteriously disappears, it’s clear to Ellie she must act quickly before someone else falls silent…

“Ellie is a detective of a different sort. Young and resolutely urban.”—Los Angeles Times

Praise for Murder on Bamboo Lane

“One of the warmest, most realistic characters to hit crime fiction in a long time.”—Lee Goldberg, New York Times bestselling author

“Scoop this one up!” —Library Journal

“Highly entertaining…Readers will want to see more of Ellie, who provides a fresh perspective on LA’s rich ethnic mix.”—Publishers Weekly

Naomi Hirahara is the Edgar® Award-winning author of Murder on Bamboo Lane, as well as the Mas Arai Mysteries. Born and raised in Pasadena, Naomi received her bachelor’s degree in international relations from Stanford University and studied at the Inter-University Center for Advanced Japanese Language Studies in Tokyo. She worked as a reporter and editor of The Rafu Shimpo in downtown Los Angeles. She is also the author of 1001 Cranes and has written, edited, and published several nonfiction books, largely about the Japanese American experience. She lives with her husband in Southern California.
Loading...
or support indie stores by buying on
(This book is on backorder)