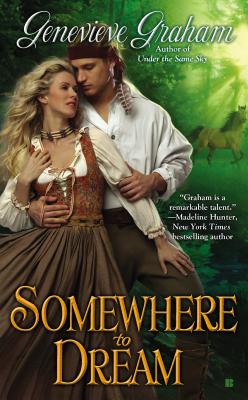 From Genevieve Graham, author of Sound of the Heart, comes the tale of two strangers living with the Cherokee—one with a warrior’s heart; the other with deadly dreams…

The Cherokee call her Shadow Girl. A white woman adopted by Indians, Adelaide is haunted by the dark dreams she hides—of her murdered family, of the men she fears, and most of all, of the ones that foretell the future. After her visions cause her to make a terrible mistake, she renounces her power and buries her dreams deep in her soul.

Until Jesse Black is captured by the tribe. His life is spared because the Cherokee believe his warrior spirit belongs to their fallen brother. Though he hates all Indians, Adelaide illuminates their way of life for him, just as he shines light into her shadowed heart. But when her dreams return, Jesse must help her face them…or die trying…

Genevieve Graham graduated from the University of Toronto in 1986 with a Bachelor of Music in Performance. While on a ski vacation in Alberta, she met her future husband in a chairlift line and subsequently moved to Calgary to be with him. They have recently settled in a small town in Nova Scotia with their two beautiful daughters, their Chinese Crested Powderpuff, and seven exotic chickens—no shortage of muses. Writing became an essential part of Genevieve’s life a few years ago when she began to write her debut novel, Under the Same Sky.

Praise For Somewhere to Dream (The MacDonnell Series)…

Praise for Somewhere to Dream
"Bold adventure combined with historical detail and complex relationships make this a beautiful book....If you lost your heart to Last of the Mohicans, then you'll love Somewhere to Dream."—New York Times bestselling author Susanna Kearsley

“With fearless realism and flawless prose, Graham reaches into the minds of her characters and the hearts of her readers to create one unforgettable story.”—Kaki Warner, national bestselling author

Praise for Sound of the Heart

“Captivating and heroic…An amazing tale of adventure and the power of true love.”—Fresh Fiction

“Beautifully written. The characters had depth, passion, and they made the tale feel genuine.”—Caffeinated Book Reviewer

Praise for the novels of Genevieve Graham

“Under the Same Sky weaves together the lives of its two protagonists with such skill and poetry it’s like entering a dream, one that will leave you both marveling and richly sated.”—Shana Abé, New York Times bestselling author of The Time Weaver

“A uniquely crafted love story…Readers will wait with bated breath for the sequel.”—Romantic Times Book Reviews

“Absolutely rapturous, full of lush imagery and a quietly confident voice that had me hooked immediately…Genevieve Graham is one to watch for historical romance readers.”—Historical Novel Review
or
Not Currently Available for Direct Purchase
Copyright © 2020 American Booksellers Association