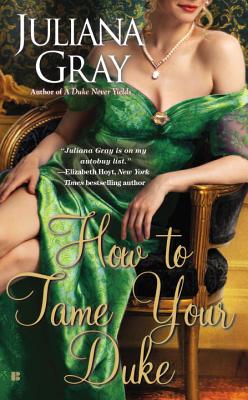 How to Tame Your Duke (A Princess in Hiding Romance #1)

England, 1888. Quiet and scholarly Princess Emilie has always avoided adventure, until she’s forced to disguise herself as a tutor in the household of the imposing Duke of Ashland, a former soldier disfigured in battle and abandoned by his wife. When chance draws her into a secret liaison with the duke, Emilie can’t resist the opportunity to learn what lies behind his forbidding mask, and find out what adventure really means...

The duke never imagines that his son’s tutor and his mysterious golden-haired beauty are one and the same. But when the true identity of his lover is laid bare, Ashland must face the demons in his past in order to safeguard both his lady—and his heart.

Praise for the novels of Juliana Gray:

Juliana’s debut romance trilogy, A Lady Never Lies, A Gentleman Never Tells, and A Duke Never Yields, won widespread acclaim, including the RT Book Review’s Seal of Excellence for August 2012. Under her real name, Beatriz Williams, she is also the author of Overseas and A Hundred Summers. She enjoys dark chocolate, champagne, and dinner parties, and adores hearing from readers.
Loading...
or
Not Currently Available for Direct Purchase