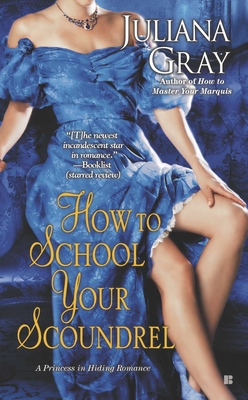 How to School Your Scoundrel (A Princess in Hiding Romance #2)

Princess Luisa has devoted her life to duty, quietly preparing to succeed her father as ruler. Nothing, however, primed her to live on the run, disguised as a personal secretary to a notorious English scoundrel. The earl is just the man to help her reclaim her throne, but Luisa is drawn to her powerful employer in ways she never imagined…

Philip, Earl of Somerton, has spent six years married to a woman in love with another man—he refuses to become a fool due to imprudent emotions ever again. Only, as his carefully laid plans for vengeance falter, fate hands him hope for redemption in the form of a beautiful and determined young princess who draws him into a risky game of secrets, seduction, and betrayal. And while his cunning may be enough to save her life, nothing can save him from losing his heart…

Praise for the Princess in Hiding romances

“Crackles with chemistry and romantic tension…Emotionally electric scenes between strong characters make this one a winner.”—Publishers Weekly (starred review)

“Featuring astute writing and charm, this work from Gray…sets off a new series with some serious heat.”—Library Journal

Juliana’s debut romance trilogy, A Lady Never Lies, A Gentleman Never Tells, and A Duke Never Yields, won widespread acclaim, including the RT Book Review’s Seal of Excellence for August 2012. She followed up that trilogy with her Princess in Hiding series, including How to Train Your Duke, How to Master Your Marquis, and How to School Your Scoundrel. As Beatriz Williams, she is also the author of Overseas and A Hundred Summers. She enjoys dark chocolate, champagne, and dinner parties, and adores hearing from readers.
Loading...
or
Not Currently Available for Direct Purchase