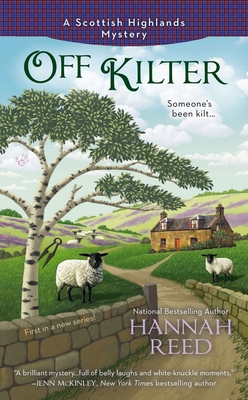 Off Kilter (A Scottish Highlands Mystery #1)

National bestselling author Hannah Reed brings mystery lovers the first Scottish Highlands mystery, in which a young writer finds herself swept up in a murder amidst the glens and lochs…

After the recent death of her mother and the dissolution of her marriage, thirty-something Eden Elliott is seriously in need of a fresh start. At the urging of her best friend, bestselling author Ami Pederson, Eden decides to embark on an open-ended trip to the picturesque village of Glenkillen in the Scottish Highlands, to do some hands-on research for a book of her own. But almost as soon as Eden arrives in the quaint town, she gets caught up in a very real drama…

The town’s sheep shearer is found murdered—clipped with his own shears—and the locals suspect Vicki MacBride, an outsider whose father’s recent death left her the surprise heir to his lucrative sheep farm. Eden refuses to believe the affable heiress is a murderer, but can she prove that someone is out to frame her new friend before she finds herself on the receiving end of more shear terror?

Praise For Off Kilter (A Scottish Highlands Mystery #1)…

Praise for Off Kilter

“If you fancy a quick, inexpensive trip to the Scottish Highlands, then Off Kilter is your ticket. Join writer Eden Elliott as she journeys to Glenkillen to research and write her first book, then go along for the investigation into the death of the town’s sheep-shearer. Hannah Reed’s new series will please Scotophiles everywhere, and they’ll soon be eager for another trip to Glenkillen.”—Miranda James, New York Times Bestselling Author of The Cat in the Stacks mystery series

“Hannah Reed’s series debut captures the appeal of the Highlands, and features a plucky, determined heroine surrounded by a cast of quirky but believable characters.”—Sheila Connolly, New York Times bestselling author of the County Cork Mysteries

“Remarkable...Reed gives cozy readers a mystery, a likable protagonist, her own view of the Scottish Highlands, plenty of adorable critters, and a sexy guy in a kilt.”—MyShelf.com

Hannah Reed is the national bestselling author of the Queen Bee Mystery series, as well as the Scottish Highland Mysteries. Her own Scottish ancestors were seventeenth century rabble-rousers who were eventually shipped to the new world, where they settled in the Michigan Upper Peninsula. Hannah has happily traveled back to her homeland several times, and in keeping with family tradition, enjoyed causing mayhem in the Highlands.
Loading...
or
Not Currently Available for Direct Purchase