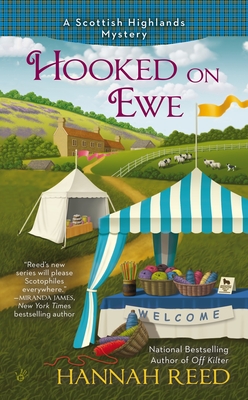 In this novel in the national bestselling Scottish Highlands Mystery series, aspiring romance novelist Eden Elliott discovers the landscape isn’t the only thing that’s dramatic when a local woman is done in...

It’s early September in Glenkillen, Scotland, when American expat (and budding romance novelist) Eden Elliott is recruited by the local inspector to act as a special constable. Fortunately it’s in name only, since not much happens in Glenkillen.

For now Eden has her hands full with other things: preparing for the sheepdog trial on the MacBride farm—a fundraiser for the local hospice—and helping her friend Vicki with her first yarn club skein-of-the-month deliveries. Everything seems to be coming together—until the head of the welcoming committee is found strangled to death with a club member’s yarn.

Now Eden feels compelled to honor her commitment as constable and herd together the clues, figure out which ones are dogs, and which ones will lead to a ruthless killer...

Praise For Hooked on Ewe (A Scottish Highlands Mystery #2)…

Praise for the Scottish Highlands Mysteries

“[Reed] captures the appeal of the Highlands, and features a plucky, determined heroine surrounded by a cast of quirky but believable characters.”—Sheila Connolly, New York Times bestselling author of the County Cork Mysteries

“Remarkable…Reed gives cozy readers a mystery, a likable protagonist, her own view of the Scottish Highlands, plenty of adorable critters, and a sexy guy in a kilt.”—MyShelf.com

Hannah Reed is the national bestselling author of the Queen Bee Mystery series and the Scottish Highland Mysteries. Her own Scottish ancestors were seventeenth century rabble-rousers who were eventually shipped to the new world, where they settled in the Michigan Upper Peninsula. Hannah has happily traveled back to her homeland several times, and in keeping with family tradition, enjoyed causing mayhem in the Highlands.
Loading...
or
Not Currently Available for Direct Purchase