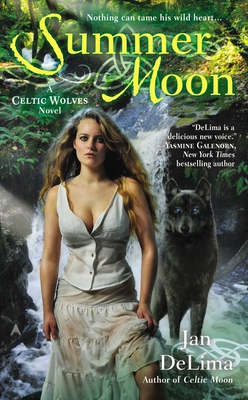 She won’t be ruled again…

Rosa Alban has been obedient her entire life. But when her alpha husband dies, she seizes the opportunity to flee the oppressive Guardians—the rulers of the secret shapeshifter world. Her flight instantly brands her as a pack traitor, and she has no choice but to seek protection from a neighboring tribe by marrying one of their sons.

Known as the Beast of Merin, Luc Black loyally plays the part of unwanted son and devoted brother. He realizes marrying Rosa will strengthen his tribe’s territory, but he has no intention of loving ever again. Still, he’s unprepared for the intense physical need the wild she-wolf awakens in him.

When the Guardians hone in on Rosa, Luc must fight to protect his new bride. And as war descends, the unlikely allies discover their destinies are irrevocably entwined…

Praise for the Celtic Moon

“DeLima’s debut is a romantic, suspenseful, and rich story about survival and loyalty to those who matter most.”—Booklist

“A welcome addition to the paranormal romance world arrives with this terrific debut novel from DeLima. Blending Celtic mythology, shapeshifters, and magic, Celtic Moon is not only an absorbing adventure; it is a story of reconciliation and acceptance. DeLima really brings these characters to life.”—RT Book Reviews

“Original and compelling…A shifter story that stands out from the crowd!”—GraveTells

Jan DeLima lives in central Maine with her husband of twenty years and two English bulldogs. Unlike many authors, she didn’t pen stories at an early age, but she has always been a dedicated reader. She loves stories and storytelling. It wasn’t until after her children entered school that she began writing. Raised in a military family, she lived in different countries such as Thailand and Germany, but home base has always been Maine. She brings a mixture of all her experiences to the Celtic Wolves series, blending castles and Celtic lore with the wild nature of her home.
Loading...
or
Not Currently Available for Direct Purchase