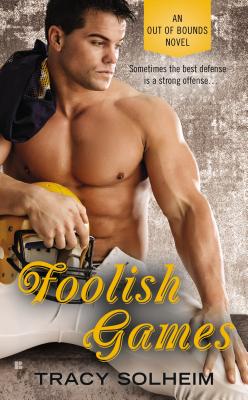 Foolish Games (An Out of Bounds Novel #2)

This Hail Mary play for the heart is the latest sports romance in the sizzling Out of Bounds series.

Bridal gown designer Julianne Marchione knows better than to lose her head at a client’s wedding. But, much to her embarrassment, a mix of migraine medication and a smoking hot football player lead to a steamy one night stand resulting in a surprise pregnancy. Julianne has every intention of leaving her NFL hookup far in the past until her son, Owen, is born with a life-threatening blood disorder that requires a transfusion—and Julianne is not a match.

Will “William the Conqueror” Connelly grew up tough, shouldering the stigma of being a bastard child born on the wrong side of the tracks. He refuses to let any child face the same discrimination. When he finds out about Owen, he’s furious that Julianne kept his son a secret. But when he sees her again at the hospital, he realizes that his feelings for her go far beyond anger.

Will insists that Owen recuperate at his home in North Carolina, and he’s adamant that Julianne become his wife—even if it’s only a temporary marriage in name only. But will their simmering attraction ever lead to a real connection?  Or are they just playing foolish games?

Tracy Solheim is the author of international bestselling contemporary romance novels featuring hot football players and the women who love them. In addition to writing novels, she is a regular columnist for USA Today's Happily Ever After Blog. She lives in Georgia with her husband, two nearly adult children, a Labrador retriever who thinks she’s a cat and a horse named after her first novel: Game On. When Tracy's not at the barn with her daughter or working out with friends—i.e. lifting heavy bottles of wine—she’s writing. Except for when she’s reading, but that’s just research.
Loading...
or support indie stores by buying on
(This book is on backorder)