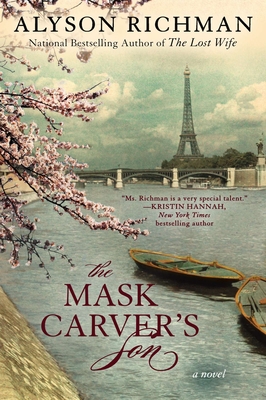 1890. Yamamoto Kiyoki is a Japanese art student, dreaming of studying in Paris with the inspiring and vibrant Impressionist painters.

Yamamoto Ryusei is Kiyoki’s father. Ryusei’s art, carving intricate masks for traditional Japanese theater, has been his refuge from loneliness since the death of his beloved wife, and he is revered as the most inspired artist of his kind. He expects his only son to honor the traditions of his family and his country, not to be seduced by Western ideas of what is beautiful. Ryusei hopes Kiyoki will follow his own distinguished career, creating masks that will become the family’s crowning achievement.

But what is a father to do when his son’s path is not what he had planned? And how can a son honor his father, and yet fulfill his own destiny?

Praise For The Mask Carver's Son…

“Richman has successfully drawn upon her historical research and her own experience . . . filled with historical detail and strong characterization.”—Library Journal

“A meticulous profile of a man struggling against his native culture, his family, and his own sense of responsibility.”—The New York Times Book Review

Alyson Richman is the author of The Mask Carver’s Son, The Rhythm of Memory, The Last Van Gogh, and The Lost Wife. She lives in Long Island with her husband and two children.

The first part of the book, narrated by Kiyoki, describes events that happened before he was born. Why is this background information important for Kiyoki’s own story? How do you think Kiyoki learned so many details about his family’s history? Does history repeat itself through the generations?

Shattered by the death of his parents, his mentor, and his wife, Ryusei becomes silent, believing he should shut out emotion in favor of the wood. Kiyoki says, “I firmly believe that my father began carving only because he knew that whatever he created with the chisel could never die” (p. 52). Does carving prevent Ryusei from feeling the pain of loss, or does it only cause more heartache by dividing him from the rest of the world?

Does Ryusei blame Kiyoki for his wife’s death? Does he resent Kiyoki? Do you think he truly loves his son? What passages in the book indicate his feelings?

Kiyoki discovers his late mother shared the same passion for art. How would Kiyoki’s life have been different if his mother had lived?

Is the concept of wearing—and creating—masks symbolic to Kiyoki’s struggle to identify his own self? Is he ever able to rid himself of the identity of “the mask carver’s son”?

Do you sympathize with Kiyoki’s struggle to carve his own path in life, separate from the duty and obligation he feels to his family? Or do you think he betrayed his father? Was selling his father’s masks a selfish act, or a necessary one?

Compare and contrast Kiyoki and Ryusei. Does Kiyoki think he is similar to his father?

When Kiyoki meets Norobu, he is surprised to feel romantic feelings for the first time in his life. Describe Kiyoki’s interpretation of his own sexuality.

What role does each of Kiyoki’s acquaintances in Paris—Takada, Hashimoto, Isabelle, Collin—play in his development as an artist and as a person? Does he allow himself to get close to anyone there? Why or why not?

After returning from France, Kiyoki’s first Japanese art exhibition is widely criticized. Do you think Kiyoki considers himself a failure?

Kiyoki returns to his hometown of Kyoto and offers to repaint the Yogo Pine at the ancient Noh theater. Why does he do this, and what is the significance of this act? How does it make him feel?

As Kiyoki grows older, do you think he regrets the choices he made as a younger man, or feel guilt over his actions?

Just like his father, Kiyoki dies alone. However, his obituary describes the artwork he left behind will be acquired and possibly exhibited by a museum in Tokyo. Does the acclaim for their art justify both Kiyoki and his father’s solitude and sacrifice in dedication to their craft? Do they both ultimately achieve the life they wanted?