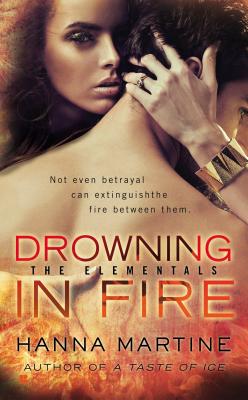 Hidden in the Hawaiian islands, there is magic pure enough to heal a broken heart…

In his last audience with the Senatus, Griffin hoped to establish a connection between his water-wielding race and the other elementals. Instead, he found himself drawn into a forbidden affair with the Chimeran general Keko. When it ended in a storm of fire and ice, Griffin was banned from the Senatus and Keko was stripped of her status.

Just as Griffin is given a second chance to prove himself worthy of a Senatus seat, he gets a call from Keko. Despite how it ended between them, she wants to hear his voice one last time before embarking on a suicide mission to save her people and redeem her name.

Despite her good intentions, members of the Senatus want her stopped—and Griffin volunteers to go after her. As he tracks his former lover through the untamed Hawaiian wilderness, she leads him straight to the source of all fire magic. But will the intense power they discover draw them back together or destroy them both?

Praise For Drowning in Fire…

Praise for the Elementals series

“A different spin on the paranormal.”—Dark Faerie Tales

"I’m excited about this world and I’m already eager to get the next one.”—Smexy Books

Hanna Martine has loved stories—particularly the romantic kind—since she was very young. She spent a decade working in an office but has since dedicated herself to writing. She’s traveled to many wonderful places around the world, including the haunted Scottish castle in which she got married. Though she lives outside of Chicago with her family, her heart will always belong to Australia. She is the author of The Elementals series (Liquid Lies, A Taste of Ice).
Loading...
or support indie stores by buying on