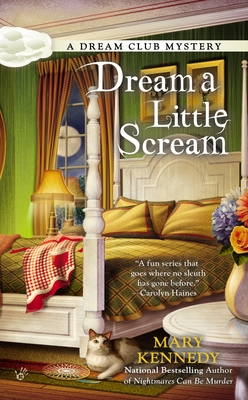 The national bestselling author of Nightmares Can Be Murder once again gathers together the members of the Dream Club in Savannah, Georgia, where the book tour of a famous chef becomes a recipe for disaster…

Behind her down-home folksy persona, celebrity chef Sonia Scott is a real Dixie diva who’s made plenty of enemies in her climb to the top of the culinary world. One of them is the newest member of the Dream Club, Etta Mae Beasley, who claims Sonia stole her family’s recipes and used them in her latest cookbook.

After Sonia’s suspicious death from anaphylactic shock at a book signing held at Taylor and Ali’s retro candy store, Etta’s revelation sows seeds of doubt in Taylor Blake’s mind. Now the Dream Club needs to put their heads together to determine if one of their own decided to give the chef her just desserts…

Praise For Dream a Little Scream (A Dream Club Mystery #2)…

Praise for Nightmares Can Be Murder:

"A fun series that goes where no sleuth has gone before. Once you pick this book up, you won't look at dreams in the same way. Or mysteries."--Carolyn Haines, award-winning author of the Sarah Booth Delaney Mysteries

"Kennedy, who previously penned the Talk Radio Mystery series, introduces a fresh premise to the cozy genre. Balancing a murder plot with humorous characters and a genteel Southern setting, this is a terrific start to a new series." --Library Journal

Mary Kennedy is the national bestselling author of more than forty novels, including Nightmares Can Be Murder, the first novel in the Dream Club Mystery series, and the Talk Radio Mystery series. She was the recipient of an award from the National Endowment for the Arts for “artistic excellence in literary fiction.” She is also a practicing clinical psychologist.
Loading...
or
Not Currently Available for Direct Purchase