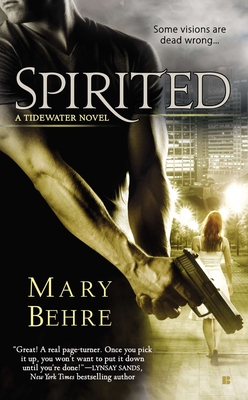 She’s running from who she is…

All Jules Scott wants is to live a normal, quiet life—preferably one that doesn’t include ghosts. Jules’s talent for communicating with the dead has brought her nothing but trouble. Despite her best efforts, needy spirits always find her and draw her into their otherworldly drama. When one implicates her in a series of deadly crimes, she may need to entrust her secrets to the person least likely to believe her…

He’ll do whatever it takes to catch her.

Detective Seth English can’t get distracted from the big case he’s working on, not even by his alluring new neighbor. He doesn’t believe that Jules had anything to do with the string of robberies-turned-murders that he’s investigating, but when she keeps showing up in all the wrong places, his gut tells him she knows more than she’s letting on. To solve his case, he’ll need to expose what the sexy redhead is hiding—no matter how impossible the truth may be…

Mary Behre is the lone female in a house full of males and the undisputed queen of her domain. She even has the glittery tiara to prove it. She loves stories with humor, ghosts, mysteries, and above all else, a good romance. When not writing, she enjoys reading, gluten-free baking, and spending time at the ocean with her family. Daily, she can be found in her office. With her Pomeranian at her feet and her hands on the keyboard, she spends her time plotting new ways to torture her characters before they find their happily ever afters.
Loading...
or
Not Currently Available for Direct Purchase