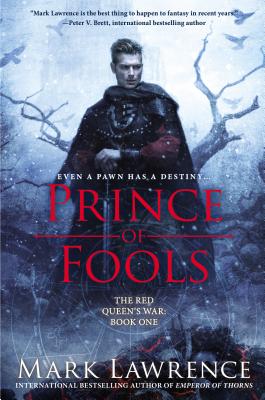 International bestselling author Mark Lawrence continues the bold new world of dark fantasy he created in the Broken Empire trilogy with the first book of the Red Queen's War...
For all her reign the Red Queen has fought the long war, contested in secret, against the powers that stand behind nations, for higher stakes than land or gold. Her greatest weapon is The Silent Sister--unseen by most and unspoken of by all.
The Red Queen's grandson, Prince Jalan Kendeth--drinker, gambler, seducer of women--is one who can see The Silent Sister. Content with his role as a minor royal, Jal pretends that the hideous crone is not there. But war with the undead is coming, and the Red Queen has called on her family to defend the realm. Jal thinks that nothing that will affect him. He's wrong...
After escaping a death trap set by the Silent Sister, Jal finds his fate magically intertwined with a fierce Norse warrior. As the two undertake a journey to undo the spell, encountering grave dangers, willing women, and an upstart prince named Jorg Ancrath along the way, Jalan gradually catches a glimmer of the truth: he and the Norseman are but pieces in a game--and the Red Queen controls the board.


Praise For Prince of Fools…

“A hard-edged tale of survival and conquest in a brutal medieval world well told and very compelling, it is different than anything I have ever read.”—Terry Brooks, New York Times bestselling author of the Shannara series

“Dark and gritty.”—Library Journal
“Epic fantasy on a George R. R. Martin scale, but on speed.”—Fixed on Fantasy

Mark Lawrence is a research scientist working on artificial intelligence. He is a dual national with both British and American citizenship, and has held secret-level clearance with both governments. At one point, he was qualified to say, "This isn't rocket science--oh wait, it actually is." He is the author of the Broken Empire trilogy (Prince of Thorns, King of Thorns, and Emperor of Thorns), the Red Queen's War trilogy (Prince of Fools, The Liar's Key, and The Wheel of Osheim) and the Book of the Ancestor series (Red Sister).
Loading...
or
Not Currently Available for Direct Purchase