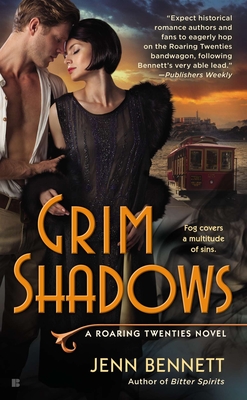 It’s the Roaring Twenties in foggy San Francisco. Prohibition is on, inhibitions are low, and dark magic is rolling into town…

Archaeologist Lowe Magnusson is packing something everyone wants. The djed amulet, a priceless Egyptian artifact, will fetch Lowe a hefty paycheck from one of San Francisco’s wealthiest. But when the handsome Swede runs into his patron’s uptight daughter, what he once considered easy money becomes maddeningly complicated…

Cursed with deadly spirits as her constant companions, curator Hadley Bacall must keep calm to hold her dangerous specters at bay and prevent them from lashing out at anything—or anyone. Trouble is, Lowe is driving her crazy, but her father needs the artifact he’s transporting. While Hadley can feel the amulet’s power, she can’t fathom the destruction—or the desire—it’s about to stir up.

“A sizzling-hot yet swoon-worthy love story with a mystery that keeps you guessing until the end.”—Kristen Callihan, author of Firelight

Jenn Bennett is an award-winning artist and author of Bitter Spirits and the Arcadia Bell urban fantasy series. Born in Germany, she’s lived and traveled extensively throughout Europe, the U.S., and the Far East. She currently lives near Atlanta with one husband and two evil pugs.
Loading...
or
Not Currently Available for Direct Purchase