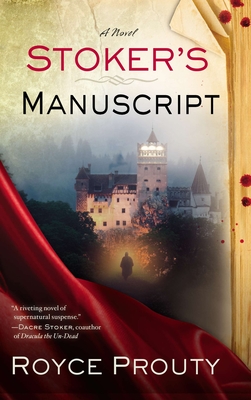 Joseph Barkeley has a gift. Without the aid of chemical testing, he can accurately determine the authenticity and age of any document, seeing details within the fibers the way a composer picks out the individual notes of a symphony. But rarely does Joseph get a job this delicate and well-paying. A mystery buyer has hired him to authenticate the original draft of Bram Stoker’s Dracula.

When he travels to Transylvania to personally deliver the manuscript to the legendary Bran Castle, Barkeley, a Romanian orphan himself, soon realizes that his employer is the son of the infamous Vlad Dracula. Imprisoned in the castle and forced to serve “the Master,” Barkeley must quickly decipher cryptic messages hidden within Stoker’s masterpiece to find the Master’s long-lost bride—or risk wearing out his welcome.

But as he delves into the history of Dracula and his own lineage, Barkeley discovers that his selection for this job was based on more than his talent with rare books. Now, he has a perilous decision to make—save his life with a coward’s flight, or wage a deadly battle with an ancient foe.

"[A]lmost impossible not to keep reading. Prouty’s careful, sometimes daring mingling of history and legend with fiction makes for a tantalizing novel in which he interweaves, to great effect, some of the mysteries surrounding the genesis of Dracula’s writing."—John Edgar Browning, editor of The Forgotten Writings of Bram Stoker

Royce Prouty is a CPA and business consultant. He and his wife live in Southern California. Stoker’s Manuscript is his first novel.
Loading...
or
Not Currently Available for Direct Purchase