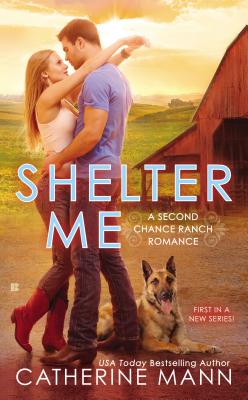 From the USA Today bestselling Catherine Mann comes this beautiful, heartwarming novel about a returning soldier, the daughter of his fallen commander, and a very special dog with a mission.  For fans of Jill Shalvis and Susan Mallery.

Nestled in the sunny fields of Tennessee lies the McDaniel family’s Second Chance Ranch Animal Rescue. Two new arrivals are on their way, but only one is the four-legged kind.
Staff Sergeant Mike Kowalski wants only one thing after he gets home from Iraq: to sleep in a king-sized bed with clean sheets. But first, he has to hand off his fallen commander’s dog, Trooper, to his family without handing off his heart to Sierra…

Sierra McDaniel needs a break. Her family life is crazy, and when she’s not mucking out kennels, she’s slogging through grad school. Sierra certainly doesn’t want another dog, especially one that reminds her of her father. And she definitely doesn’t want to see Mike with that charming smile of his…

But Trooper has a mission of his own. Before too long Mike is moving to the ranch to lend a hand—and hoping for his own second chance with Sierra.

Praise for SHELTER ME:
"Col. Allen McDaniel was killed by a roadside bomb in Iraq, and his family is devastated. Sgt. Mike Kowalski brings Allen’s dog, Trooper, back to the McDaniels and the precocious pooch sets about making things right, one person at a time. Sierra McDaniel helps her mother keep the ranch running and the family functioning while carrying a full course load at school. The last thing she wants is her dead father’s dog; neither does she want to remember the passionate moments from her brief affair with Mike. But the connection between the two is still strong, and they to resume their affair. Trooper’s asides expressing his thoughts, memories, and opinions about the family are some of the funniest moments in this romance. The story isn’t just about the love between Sierra and Mike—it also covers the love between mother and daughter, grandfather and granddaughter, dog and human, neighbor and neighbor, and even the army and its troops. There is indeed plenty of love to go around, and animal fans in particular will be swept away by it." --Publishers Weekly (starred review)

RITA Award winner Catherine Mann is the USA Today bestselling author of numerous romances including the Dark Ops novels. She lives in Florida with her military flyboy husband and their four children.
Loading...
or
Not Currently Available for Direct Purchase