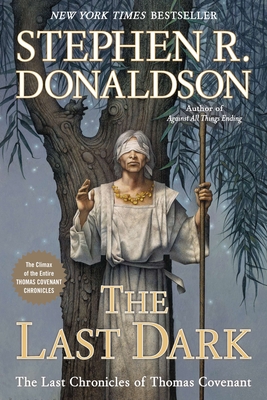 The Climax of the Entire Thomas Covenant Chronicles

After more than three decades, having attained bestseller status all over the world, The Chronicles of Thomas Covenant reaches its conclusion. This is a truly historic moment in fantasy, as Stephen R. Donaldson’s innumerable fans learn the final fate of the Land.

The Worm of the World’s End is roused, seeking the ruin of all things....

Compelled step-by-step to actions whose consequences they could neither foresee nor prevent, Thomas Covenant and Linden Avery have fought for what they love in the magical reality known only as “the Land.” Now they face their final crisis. Reunited after their separate struggles, they discover in each other their true power—and yet they cannot imagine how to stop the Worm of the World’s End from unmaking Time. Nevertheless, they must resist the ruin of all things, giving their last strength in the service of the world’s continuance.

You risk much, as you have ever done. Mayhap you will prevail. If you do not, your worth is not thereby diminished.

Praise For The Last Dark (Last Chronicles of Thomas Covenant #4)…

“Donaldson builds toward a staggering resolution of love, endurance, and self-sacrifice.”—Tor.com

“[Donaldson’s] work is remarkably distinct in its hero, its themes, its relationship to the real world.”—The Wall Street Journal

Stephen R. Donaldson is the author of the original six volumes of The Chronicles of Thomas Covenant, a landmark in modern fantasy. Every volume, beginning with Lord Foul’s Bane in 1977, has been an international bestseller. Donaldson returned to the series with The Last Chronicles of Thomas Covenant, comprising The Runes of the Earth, Fatal Revenant, Against All Things Ending, and now the final volume, The Last Dark. Donaldson lives in New Mexico.
Loading...
or support indie stores by buying on