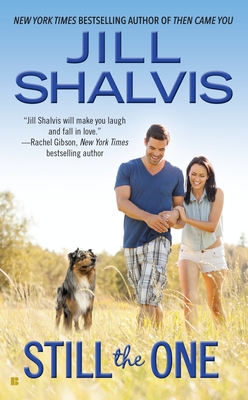 Still the One (An Animal Magnetism Novel #6)

Love is a dare in this Animal Magnetism romance by the award-winning, New York Times bestselling author of the Lucky Harbor series...

Darcy Stone is game for anything—except sexy Navy vet and physical therapist AJ Colten, the guy who’d rejected her when she’d needed him most. Now the shoe is on the other foot and he needs her to play nice and help him secure grants for his patients. Unfortunately Darcy can’t refuse. She needs the money to fund her passion project: rescuing S&R dogs and placing them with emotionally wounded soldiers.

AJ admits it—Darcy is irresistible. But he’s already been battle-scarred by a strong-willed, vivacious, adventurous woman like Darcy, and he’s not making the same mistake twice—until he and Darcy are forced to fake a relationship. Growing closer than they’d ever imagined possible, Darcy and AJ have to ask themselves: how much between them is pretend? What’s the real thing? And where does it go from here?

Praise For Still the One (An Animal Magnetism Novel #6)…

“Animals and hot heroes. How can you not love a romance like that?”—New York Times bestselling author Jaci Burton

“Exactly what a romance story should be.”—Dear Author

Jill Shalvis is the New York Times bestselling author of several popular series including the Heartbreaker Bay series, the Animal Magnetism series, the Lucky Harbor series, the Wilders series, and the Sky High series. Her baseball-themed romances include Slow Heat and Double Play, and she also appears in anthologies such as He’s The One.
Loading...
or
Not Currently Available for Direct Purchase