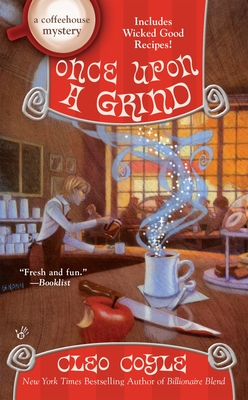 Once Upon a Grind (A Coffeehouse Mystery #14)

From the New York Times bestselling author of Billionaire Blend—a mystery with a sleeping beauty that is “so much fun to read.”*

It’s Fairy Tale Week in New York City, and Clare Cosi has given her coffee truck a “Jack and the Beanstalk” makeover for the Central Park festival. Her ex-husband has contributed a bag of African coffee beans with alleged magical properties, and his octogenarian mother is giving out readings of the grinds. But Clare remains skeptical—until she receives a vision that helps her find a young model’s body in the park’s woods.

The police dismiss “sleeping beauty” as the victim of a drug overdose. But when Clare uncovers evidence that points to murder, she winds up with a dangerous predator on her heels and an investigation that leads right back to her own NYPD detective boyfriend. If she doesn’t solve this mystery fast, those magic beans predict an unhappy ending.

*Once Upon a Romance

Praise For Once Upon a Grind (A Coffeehouse Mystery #14)…

“[An] amusing combination of caffeine and chaos.”—Publishers Weekly

“This series continues to mix clever and intricate plots with a regular cast of characters who become more enjoyable with every episode.”—Booklist

Cleo Coyle is a pseudonym for Alice Alfonsi, writing in collaboration with her husband, Marc Cerasini. Both are New York Times bestselling authors of The Coffeehouse Mysteries, now celebrating over ten years in print. Alice and Marc are also bestselling media tie-in writers who have penned properties for Lucasfilm, NBC, Fox, Disney, Imagine, and MGM. They live and work in New York City, where they write independently and together, including the national bestselling Haunted Bookshop Mysteries.
Loading...
or support indie stores by buying on