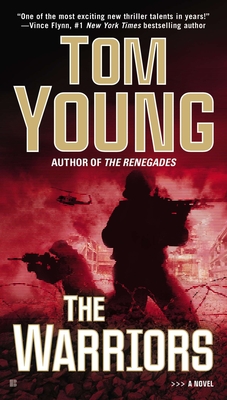 The Warriors (A Parson and Gold Novel #4)

A novel of modern warfare from the author of Sand and Fire and The Hunters..."one of the most exciting new thriller talents in years" (Vince Flynn).
Lieutenant Colonel Michael Parson’s newest assignment is a welcome change of pace. Manas Air Base in Kyrgyzstan is a major stopover for planes in and out of Afghanistan, but his new job as safety officer is a pretty laid-back way to spend the next year. Or so he thought.
A C-27 crashes on the runway, its fuselage packed with electronic gear—and raw opium. Recruiting Sergeant Major Sophia Gold as interpreter, Parson must investigate not only what caused the crash, but who supplied its cargo. And the answers they find lead to a nightmarish revelation.
A new Balkan war is brewing, driven by a man of ruthless ambition. Parson himself flew during the wars in Bosnia and Kosovo, so he knows their horrors firsthand. But neither he nor Gold has seen anything like what’s about to happen now.

Praise For The Warriors (A Parson and Gold Novel #4)…

“There are writers, and there are fighters—readers are lucky that…Young is both.” —Alex Berenson, #1 New York Times bestselling author of The Night Ranger

“A terrific addition to what has become an exemplary series...Young handles all the military thriller logistics like a seasoned pro...but it’s his superior writing that elevates this book above most of the others in this crowded subgenre.”—Publishers Weekly (starred review)

Tom Young has logged more than 4,500 hours as a flight engineer for the Air National Guard in Afghanistan, Iraq, Bosnia, Kosovo, and elsewhere, including Latin America, the Horn of Africa, and the Far East. His military honors include three Air Medals, three Aerial Achievement Medals, and the Air Force Combat Action Medal. Young served with the Air National Guard for more than twenty years and retired as a Senior Master Sergeant. He is also the author of The Renegades.
Loading...
or
Not Currently Available for Direct Purchase