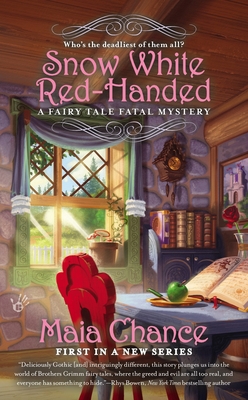 Miss Ophelia Flax is a Victorian actress who knows all about making quick changes and even quicker exits. But to solve a fairy-tale crime in the haunted Black Forest, she’ll need more than a bit of charm…

1867: After being fired from her latest variety hall engagement, Ophelia acts her way into a lady’s maid position for a crass American millionaire. But when her new job whisks her off to a foreboding castle straight out of a Grimm tale, she begins to wonder if her fast-talking ways might have been too hasty. The vast grounds contain the suspected remains of Snow White’s cottage, along with a disturbing dwarf skeleton. And when her millionaire boss turns up dead—poisoned by an apple—the fantastic setting turns into a once upon a crime scene.

To keep from rising to the top of the suspect list, Ophelia fights through a bramble of elegant lies, sinister folklore, and priceless treasure, with only a dashing but mysterious scholar as her ally. And as the clock ticks towards midnight, she’ll have to break a cunning killer’s spell before her own time runs out…

A finalist for the 2004 Romance Writers of America Golden Heart Award, Maia Chance is a Ph.D. candidate at the University of Washington. She is writing her dissertation on nineteenth-century American literature.

“Offering a clever twist on the tales of the Brothers Grimm, this debut historical cozy (and series launch) introduces an attractive, spunky heroine…and an entertaining, well-constructed plot that will satisfy fans of folklore and fairy tales.”—Library Journal (starred review)

“Deliciously Gothic, intriguingly different, this story plunges us into the world of Brothers Grimm fairy tales, where the greed and evil are all too real, and everyone has something to hide.”—Rhys Bowen, New York Times bestselling author

“[Chance’s] lively debut, the first in a new cozy series…will whet the reader’s appetite for Ophelia and Prue’s next misadventure.”—Publishers Weekly
or support indie stores by buying on
Copyright © 2020 American Booksellers Association