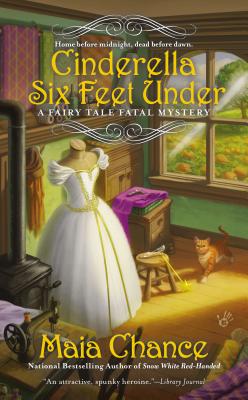 This Cinderella goes from ashes to ashes in the new Victorian-era Fairy Tale Fatal Mystery by the author of Snow White Red-Handed . . .

Variety hall actress Ophelia Flax’s plan to reunite her friend Prue with her estranged—and allegedly wealthy—mother, Henrietta, is met with a grim surprise. Not only is the marquise’s Paris mansion a mouse-infested ruin, but Henrietta has inexplicably vanished, leaving behind an evasive husband, two sinister stepsisters, and a bullet-riddled corpse in the pumpkin patch decked out in a ball gown and one glass slipper—a corpse that also happens to be a dead ringer for Prue.

Strangely, no one at 15 rue Garenne seems concerned about who plugged this luckless Cinderella or why, so the investigation is left to Ophelia and Prue. It takes them through the labyrinthine maze of the Paris Opera, down the trail of a legendary fairy tale relic, into the confidence of a wily prince charmless, and makes them vulnerable to the secrets of a mysterious couturière with designs of her own on Prue’s ever-twisting family history.

“Offering a clever twist on the tales of the Brothers Grimm, this debut historical cozy (and series launch) introduces an attractive, spunky heroine…and an entertaining, well-constructed plot that will satisfy fans of folklore and fairy tales.”—Library Journal (starred review)

“Deliciously Gothic, intriguingly different, this story plunges us into the world of Brothers Grimm fairy tales, where the greed and evil are all too real, and everyone has something to hide.”—Rhys Bowen, New York Times bestselling author

“[Chance’s] lively debut, the first in a new cozy series…will whet the reader’s appetite for Ophelia and Prue’s next misadventure.”—Publishers Weekly

The author of the Fairy Tale Fatal Mysteries, including Snow White Red-Handed, and finalist for the 2004 Romance Writers of America Golden Heart Award, Maia Chance is a Ph.D. candidate at the University of Washington. She is writing her dissertation on nineteenth-century American literature.
Loading...
or support indie stores by buying on