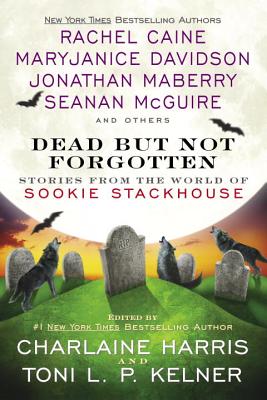 Dead But Not Forgotten

Stories from the World of Sookie Stackhouse

Discover the strange, supernatural residents of Bon Temps, Louisiana, like never before in this collection of stories from the world of Sookie Stackhouse.

The #1 New York Times bestselling Sookie Stackhouse novels by Charlaine Harris spawned the hit TV show True Blood and captivated fans around the world—including other authors. Now this group of writers, specifically chosen by Charlaine, pays tribute to “the southern, mind-reading belle who gets mixed up in the world of vampires and magical creatures” (The Kansas City Star) with a collection of fifteen stories about your favorite residents of Bon Temps.

Praise For Dead But Not Forgotten: Stories from the World of Sookie Stackhouse…

Praise for Dead But Not Forgotten

“A must-read…A great mix of funny and dark, this anthology will have readers and fans beyond excited.”—Suspense Magazine

“This wildly entertaining anthology features well-known authors delving into the lives of existing characters found in Charlaine Harris's Sookie Stackhouse novels...Crisp storytelling, sharp dialogue and great pacing are highlightsof what, for Sookie fans, will be an anthology to die for.”—RT Book Reviews

Charlaine Harris is the #1 New York Times bestselling author of the Sookie Stackhouse and Midnight, Texas, fantasy/mystery series and the Aurora Teagarden, Harper Connelly, and Lily Bard mystery series. Her books have inspired HBO’s True Blood, NBC’s Midnight, Texas, and the Aurora Teagarden movies for Hallmark Movies & Mysteries. She has lived in the South her entire life.

Toni L. P. Kelner writes the Family Skeleton Mysteries as Leigh Perry and, under her own name, is the author of the “Where Are They Now?” Mysteries and the Laura Fleming mystery series. She has won an Agatha Award and a Romantic Times Career Achievement Award, and has been nominated multiple times for the Anthony, the Macavity, and the Derringer awards.
Loading...
or
Not Currently Available for Direct Purchase