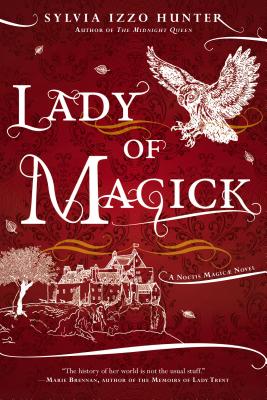 Sylvia Izzo Hunter brought “both rural Brittany and an alternative Regency England to vivid life”* in The Midnight Queen, her debut novel of history, magic, and myth. Now, in her new Noctis Magicae novel, Sophie and Gray Marshall are ensnared in an arcane plot that threatens to undo them both.

In her second year of studies at Merlin College, Oxford, Sophie Marshall is feeling alienated among fellow students who fail to welcome a woman to their ranks. So when her husband, Gray, is invited north as a visiting lecturer at the University in Din Edin, they leap at the chance. There, Sophie’s hunger for magical knowledge can finally be nourished. But soon, Sophie must put her newly learned skills to the test.

Sophie returns home one day to find a note from Gray—he’s been summoned urgently to London. But when he doesn’t return, and none of her spells can find a trace of him, she realizes something sinister has befallen him. With the help of her sister, Joanna, she delves into Gray’s disappearance, and soon finds herself in a web of magick and intrigue that threatens not just Gray, but the entire kingdom.

Sylvia Izzo Hunter was born in Calgary, Alberta, but now lives in Toronto with her husband and daughter and their slightly out-of-control collections of books, comics, and DVDs. When not writing, she works in scholarly journal publishing, sings in two choirs, reads as much as possible, knits hats, and engages in experimental baking. Her favorite Doctor is Tom Baker, her favorite pasta shape is rotini, and her favorite Beethoven symphony is the Seventh. She is the author of The Midnight Queen.

Praise For Lady of Magick (A Noctis Magicae Novel #2)…

Praise for The Midnight Queen

“The history of her world is not the usual stuff…inventive.”—Marie Brennan, Author of The Memoirs of Lady Trent

“Transported me back to those days when I discovered Anne McCaffrey, Robin McKinley, and…Tamora Pierce.”—TheBookPushers.com
or
Buy Here
Copyright © 2020 American Booksellers Association