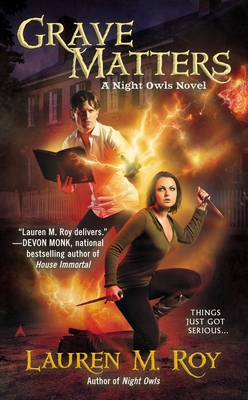 Night Owls bookstore always keeps a light on and evil creatures out. But, as Lauren M. Roy's thrilling sequel continues, even its supernatural staff isn’t prepared for the dead to come back to life…

Elly grew up training to kill things that go bump in the night, so she’s still getting used to working alongside them. While she’s learned to trust the eclectic group of vampires, Renfields, and succubi at Night Owls bookstore, her new job guarding Boston’s most powerful vampire has her on edge—especially when she realizes something strange is going on with her employer, something even deadlier than usual…

Cavale isn’t thrilled that his sister works for vampires, but he’s determined to repair their relationship, and that means trusting her choices—until Elly’s job lands all of the Night Owls in deep trouble with a vengeful necromancer. And even their collective paranormal skills might not be enough to keep them from becoming part of the necromancer’s undead army…

“A fast, fun read that kept me turning the pages. Lauren M. Roy delivers a plot that zips, dialogue that zings, and a cast of characters you’ll cheer for to the very end. Thumbs up!”—Devon Monk, national bestselling author of Stone Cold

“Roy’s debut is an entertaining and exciting addition to the urban fantasy field…A good cast, believable interactions, and some vivid and brutal fight sequences.”—Publishers Weekly

“Vampires, a bookstore, and a battle over an ancient book—how could I not like Night Owls with that mixture?...A great start to a new series and one that urban fantasy fans should appreciate.”—Fresh Fiction

“A good read and lots of fun. It was action-packed, with an ending that I completely didn’t expect, and hints of more drama and mystery to come. Coupled with the humor and the interesting cast of characters (plus a bookstore!!), I know that I plan on coming back.”—All Things Urban Fantasy

Lauren M. Roy started out as an independent bookseller, moved on to Hachette Book Group (where she has been a telephone sales representative for ten years), and is now completing her bookselling hat trick as an author. She has done some freelance writing for tabletop role-playing games, including Dragon Age, Trail of Cthulhu, and A Song of Ice and Fire Roleplaying. Lauren lives in southeastern Massachusetts with her husband, their cats, and the ghosts of houseplants she forgets to water. She is a graduate of Viable Paradise, the science fiction and fantasy writers’ workshop. Night Owls was her first novel.
Loading...
or
Not Currently Available for Direct Purchase