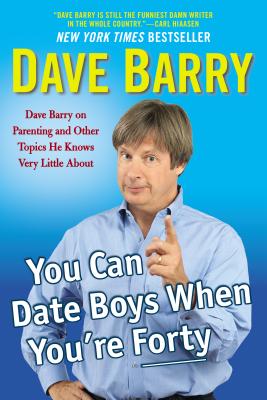 You Can Date Boys When You're Forty

If there's one thing that New York Times bestselling author and Pulitzer Prize-winning columnist Dave Barry is an expert on, it's raising a daughter. ...which means he's not an expert on much considering the breadth of his knowledge on that subject fills only a single chapter of a book. However, what Dave Barry is good at is giving unsolicited advice on topics he's definitively not an expert on. In fact, he now has an entire book filled with guidance on things he knows nothing about, including: surviving in the wild, wooing women, cremation, maintaining a scintillating conversation, Justin Bieber, the U.S. Postal Service, enduring the TSA, the Israeli-Palestinian conflict, and, most obviously, being a professional author. With trademark wit and unmatched insight into the insanity of everyday life, Dave Barry presents a series of hilarious, never-before-published essays on the trials and tribulations of living and laughing in the modern age.

Dave Barry's most recent bestsellers include Insane City; I'll Mature When I'm Dead; his Peter Pan prequels, written with Ridley Pearson; Dave Barry's History of the Millenium (So Far); and Lunatics, written with Alan Zweibel. From 1983 to 2004, Barry wrote a weekly column for the Miami Herald that, in 1988, won a Pulitzer Prize for commentary. He lives in Coral Gables, Florida.
Loading...
or
Not Currently Available for Direct Purchase