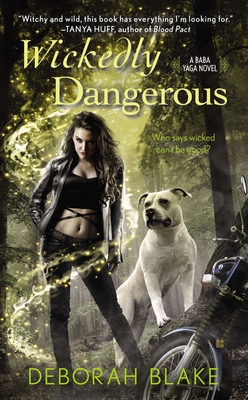 Known as the wicked witch of Russian fairy tales, Baba Yaga is not one woman, but rather a title carried by a chosen few. They keep the balance of nature and guard the borders of our world, but don’t make the mistake of crossing one of them…

Older than she looks and powerful beyond measure, Barbara Yager no longer has much in common with the mortal life she left behind long ago. Posing as an herbalist and researcher, she travels the country with her faithful (mostly) dragon-turned-dog in an enchanted Airstream, fulfilling her duties as a Baba Yaga and avoiding any possibility of human attachment.

But when she is summoned to find a missing child, Barbara suddenly finds herself caught up in a web of deceit and an unexpected attraction to the charming but frustrating Sheriff Liam McClellan.

Now, as Barbara fights both human enemies and Otherworld creatures to save the lives of three innocent children, she discovers that her most difficult battle may be with her own heart…

Praise for Wickedly Dangerous"This is paranormal romance at its best, with all the magic and mayhem tied together with very human emotions, even when the characters aren't quite human."–Alex Bledsoe, author of Wisp of a Thing "In Wickedly Dangerous, Deborah Blake has updated Baba Yaga for the 21st century; witchy and wild, with a kick-ass woman, witty repartee, and roots to the past. This book has everything I’m looking for." –Tanya Huff, author of The Silvered "An addicting plot combined with a unique adventure and an intelligent, pragmatic heroine kept me glued to the page. I never had so much fun losing sleep!"–Maria V. Snyder, New York Times bestselling author of the Healer series

Deborah Blake has published seven books on modern witchcraft with Llewellyn Worldwide and has an ongoing column in Witches & Pagans Magazine. When not writing, Deborah runs The Artisans’ Guild, a cooperative shop she founded with a friend in 1999, and also works as a jewelry maker, tarot reader, and energy healer. She lives in a 120-year-old farmhouse in rural upstate New York with five cats who supervise all her activities, both magical and mundane.
Loading...
or support indie stores by buying on