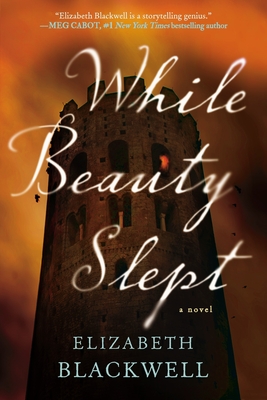 “Elizabeth Blackwell is a story-telling genius. Her mesmerizing writing weaves a spell that will enchant you. While Beauty Slept breathes new life into the fairytale genre with a historical twist that will take your breath away.” —Meg Cabot, #1 New York Times bestselling author of The Princess Diaries and Heather Wells mystery series

I am not the sort of person about whom stories are told. Those of humble birth suffer their heartbreaks and celebrate their triumphs unnoticed by the bards, leaving no trace in the fables of their time…

And so begins Elise Dalriss’s story. When she hears her great-granddaughter recount a minstrel’s tale about a beautiful princess asleep in a tower, it pushes open a door to the past, a door Elise has long kept locked. For Elise was the companion to the real princess who slumbered—and she is the only one left who knows what actually happened so many years ago.

As the memories start to unfold, Elise is plunged back into the magnificent world behind the palace walls she left behind more than a half century ago, a labyrinth where the secrets of her real father and the mysterious fate of her mother connect to an inconceivable evil. Elise has guarded these secrets for a lifetime. As only Elise understands all too well, the truth is no fairy tale.

Elizabeth Blackwell is a freelance writer. Her work has appeared in the Wall Street Journal, Ladies’ Home Journal, Parenting, and the Chicago Tribune, among other publications.

Praise For While Beauty Slept…

"Following in the inspired footsteps of Gregory Maguire’s fairy-tale twists, this debut novel puts a spellbinding new spin on a classic yarn.” —Booklist

“Unexpected and heartrending . . . A gripping tale full of romance, secrets, and promises made and broken. This beautiful, original reinterpretation of a classic story is engrossing and often surprising.” —Library Journal, starred review

“Elizabeth Blackwell’s writing is magical in this complex, dark, and sensual retelling of ‘Sleeping Beauty.’ Imaginative, evocative, full of surprises, this is a captivating debut.” —M.J. Rose, international bestselling author of Seduction

" While Beauty Slept is like no version of the Sleeping Beauty story that you’ve read before." —Alma Katsu, author of The Taker trilogy

The author tells the story of Sleeping Beauty from the perspective of a maid, a character who is not part of the original fairy tale. Why do you think she made this decision? How would the book have been different if it had been told in Rose’s voice?

The narrator never specifies the country or year in which the story is set. Did you picture a particular place or historical era while you were reading? Why did the author chose to omit those details?

Elise is raised in rural poverty, yet she becomes the queen’s personal servant at a very young age. Did you find her rapid rise believable? What talents allow her to thrive in a royal household?

Elise first hears Millicent described as an “old witch” by Petra and admits she is “shaken” by their initial encounter. Why, then, does she crave Millicent’s approval? Is it possible to fear and admire someone at the same time?

Why does Elise reject Marcus’s first offer of marriage? Does she make the right decision?

After accepting Dorian’s proposal, Elise admits, “I did not love him, and I did not entirely trust him.” Yet she seems very attracted to him. Does she make the right decision in agreeing to marry him? How do her feelings for Dorian change during their marriage? Did your opinion of him change during the course of the book?

Consider the role Flora plays in her family’s fate. How does she influence the way in which things turn out? Is she an admirable character? Why or why not?

During their final, deadly encounter, Elise says of Millicent: “Had she not been born a woman, what a ruler she might have been! Freed of the bitterness that had so corrupted her soul, she would have been capable of greatness.” Do you agree? To what extent are Millicent’s actions driven by frustrated ambition-ambition that might be admired if she were a man? Do you think she is inherently evil?

The castle is a rigidly hierarchical society, where women and servants are expected to live within very restricted roles. Which characters are able to go beyond the limitations of their position? How do they do it? What does the book reveal about the not-so-glamorous realities of living in a royal family?

How do the book’s events differ from your own memories of the Sleeping Beauty story? Were you surprised by the author’s decision to turn the traditional tale on its head by making Rose unable to sleep? Were you struck by any other differences from the story as it is usually told? What is this fairy tale’s enduring appeal?