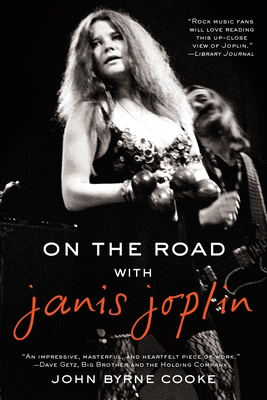 On the Road with Janis Joplin

As a road manager and filmmaker, John Byrne Cooke helped run the Janis Joplin show—and record it for posterity. Now he reveals the never-before-told story of his years with the young woman from Port Arthur who would become the first female rock-and-roll superstar.

In 1967, as the new sound of rock and roll was taking over popular music, John Byrne Cooke was at the center of it all. As a member of D. A. Pennebaker’s film crew, he witnessed the astonishing breakout performances of Janis Joplin and Jimi Hendrix at the Monterey Pop Festival that June. Less than six months later, he became road manager for Janis and her band, Big Brother and the Holding Company, and from then on, Cooke was a constant presence behind the scenes as the woman called Pearl took the world by storm.

This intimate memoir spans the years he spent with Janis, from Monterey to Europe, Woodstock and Festival Express. Cooke tells the whole incredible story as only someone who lived it can.

Praise For On the Road with Janis Joplin…

“The story of the woman who skyrocketed to fame as the first female rock superstar and left it at a tragically young age—from someone who had a front-row seat.”—New York Post

“The best book about Janis [Joplin]."—Sam Andrews, Big Brother and the Holding Company

“[Cooke] is a gifted writer, letting Joplin’s vivaciousness and intensity shine throughout the work.”—Library Journal

“[Janis Joplin] perfectly expressed the feelings and yearnings of the girls of the electric generation—to be all woman, yet equal with men; to be free, yet a slave to real love; to [reject] every outdated convention, and yet get back to the basics of life.” —Lillian Roxon, rock critic

“Joplin belonged to that select group of pop figures who mattered as much for themselves as for their music. Among American rock performers, she was second only to Bob Dylan in importance as a creator-recorder-embodiment of her generation’s mythology.” —Ellen Wills, rock journalist

John Byrne Cooke was Janis Joplin’s road manager from 1967 until her death. He is an award-winning author of four previous books, a performing musician with decades of experience, a photographer, and a filmmaker. He has written book reviews for the New York Times, Washington Post Book World, and the Los Angeles Times. He lives in Jackson Hole, Wyoming.
Loading...
or
Not Currently Available for Direct Purchase