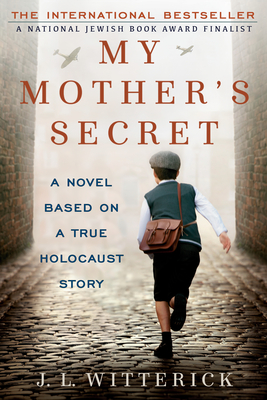 A Novel Based on a True Holocaust Story

Inspired by a true story, My Mother’s Secret is a captivating and ultimately uplifting tale intertwining the lives of two Jewish families in hiding from the Nazis, a fleeing German soldier, and the mother and daughter who save them all.

Franciszka and her daughter, Helena, are simple, ordinary people...until 1939, when the Nazis invade their homeland. Providing shelter to Jews in Nazi-occupied Poland is a death sentence, but Franciszka and Helena do exactly that. In their tiny home in Sokal, they hide a Jewish family in a loft above their pigsty, a Jewish doctor with his wife and son in a makeshift cellar under the kitchen, and a defecting German soldier in the attic—each party completely unknown to the others. For everyone to survive, Franciszka will have to outsmart her neighbors and the German commander.

Told simply and succinctly from four different perspectives—all under one roof—My Mother’s Secret is a testament to the kindness, courage, and generosity of ordinary people who chose to be extraordinary.

Praise For My Mother's Secret: A Novel Based on a True Holocaust Story…

“A reflection of our own era, a reminder of how far wrong we can be led...an important book.”—Joseph Kertes, author of Gratitude, winner of the Canadian Jewish Book Award

“The woman at the heart of this novel will haunt you after you read about her fearless compassion, her defiance of the odds of survival.”—Anna Porter, award-winning author of Kasztner’s Train

J.L. Witterick  is the international bestselling author of My Mother's Secret. This novel was written because she was so inspired by the true story of Franciszka Halamajowa. Courage, kindness, and sacrifice should never be forgotten.

At the beginning of My Mother’s Secret, there is a quote from Elie Wiesel: “To remain silent and indifferent is the greatest sin of all.” What do you think is the importance of this quote to the novel as a whole?

Does Helena’s point of view, as Franciszka’s daughter, provide different insights into Franciszka’s character and motivations than the other points of view in the book?

We see many of the characters in My Mother’s Secret display acts of courage and instill hope in others. What part does hope play in the characters’ lives, in their actions, especially as a means of survival?

A nosy neighbor asks Franciszka why she is getting extra water from the well. Franciszka tells Helena, “We’re in the middle of a war and someone has the time to wonder about why I am using so much water!” What do you think is the larger message behind Franciszka’s retort? How does it reflect her moral compass?

Damian’s death is heartbreaking for both Franciszka and Helena, and Helena asks, “Do we really heal stronger where we are broken?” In other words, can we fully heal from drastic hardship? Helena does not think it is possible. What do you think?

In many ways, Bronek has to grow up fast, with the death of his father and then starting his own family. What are examples of Bronek’s heightened responsibilities, especially his role as protector?

In Chapter 20, Bronek says he is not a “peacemaker,” like Dawid, and he punches Resnit in the nose. The theme of violence versus peace is ubiquitous throughout My Mother’s Secret. Do you think Bronek equates acts of violence for a cause with his role as protector? How does his definition of his role relate to Franciszka’s definition of what a protector should be?

Franciszka has to act in clever ways to ensure that the people she is hiding are not found. How do you think Franciszka balanced living in constant fear of discovery with keeping up her savvy façade, especially when hiding Vilheim?

Mikolaj asks his mother, “Why do people hate us so much, Mama?” What is your take on how this question highlights the vast inequities at the heart of World War II? Is it a question that needs asking today?

Vilheim’s mother tells him before he is drafted to “Avoid as much as you can. Do not be brave. This is not a war of necessity or principle.” Later, Vilheim reflects, “I always thought that courageous people were those who were not afraid. Meeting Franciszka and her daughter, I realize that courageous people are afraid like everyone else. They just act despite the fear.” Can it be said that the difference between courageous people and people who cower at the thought of stepping up for what they believe is simply a matter of action versus inaction?

My Mother’s Secret was inspired by a true story of the Holocaust and, incredibly, a story with a happy ending as well. Does the fact that the book was based on real events alter your opinion of it?