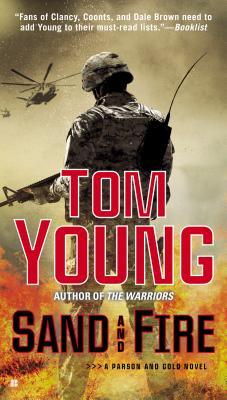 Sand and Fire (A Parson and Gold Novel #5)

From Tom Young, author of The Warriors and The Renegades, comes an explosive new novel of the war on terror.

North Africa. A jihadist leader has seized a supply of sarin gas left over from the Gaddafi regime and is wreaking havoc on an escalating scale. Gunnery Sergeant A. E. Blount—a Marine and the grandson of one of the first black Marines—sets out with his strike team to kill or capture the terrorist leader. Instead, they flew into a trap.

Many of the team are killed, the rest captured, and the leader threatens that he will execute one prisoner a day until U.S forces withdraw. Sophia Gold and Lieutenant Colonel Michael Parson, Blount’s friends and colleagues, rush to Libya to help coordinate rescue efforts. But the ordeal has only just begun.

Soon, they will all be fighting for their lives in the sand and fire of the desert.

Praise For Sand and Fire (A Parson and Gold Novel #5)…

“Fans of Clancy, Coonts, and Dale Brown need to add Young to their must-read lists.”—Booklist

“One of the most exciting new thriller talents in years!”—Vince Flynn, #1 New York Times bestselling author

Tom Young retired from the Air National Guard in 2013 at the rank of senior master sergeant. He served more than twenty years as a flight engineer on the C-130 Hercules and the C-5 Galaxy, logging nearly 5,000 hours of flight time. His career included service in Afghanistan, Iraq, Bosnia, Kosovo, the Horn of Africa, and elsewhere. Among his military honors are the Meritorious Service Medal, three Air Medals, three Aerial Achievement Medals, and the Air Force Combat Action Medal.

Young also holds degrees from the University of North Carolina at Chapel Hill. He studied writing there and at the Sewanee Writers’ Conference, among other places. Besides his previous novels, The Mullah’s Storm, Silent Enemy, The Renegades, and The Warriors, he is the author of the Sand and Fire ebook special Phantom Fury and the oral history The Speed of Heat: An Airlift Wing at War in Iraq and Afghanistan, and he contributed to the anthology Operation: Homecoming, edited by Andrew Carroll. He lives in Alexandria, Virginia.
Loading...
or support indie stores by buying on