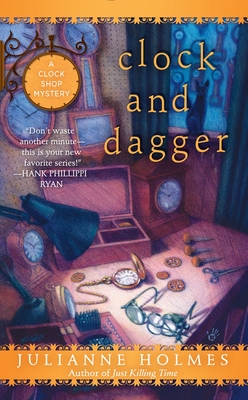 Expert clockmaker Ruth Clagan has another murder on her hands in the second Clock Shop Mystery from the author of Just Killing Time.

Ruth has three days to pull off four events—including the grand reopening of Cog & Sprocket, the clock shop she inherited from her grandfather—so she doesn’t have time for Beckett Green’s nonsense. The competitive owner of a new bookstore, Green seems determined to put other businesses out of business by also carrying their specialty items. He’s trying to steal Ruth’s new watchmaker, Mark Pine, not to mention block her plans to renovate the town clock tower.

Ruth is already all wound up when she’s alarmed to discover Mark’s dead body. As the denizens of Orchard each chime in as to who they think the murderer is, Ruth needs to watch her back as she investigates on her own. Despite the danger, Ruth won’t stop until the killer is behind bars and serving time...

Praise For Clock and Dagger (A Clock Shop Mystery #2)…

“A fast-moving story, and a great start to an intriguing new series.”—Sheila Connolly, New York Times bestselling author of the Orchard Mysteries, the Museum Mysteries, and the County Cork Mysteries

“Perfect timing! In her charming debut, Julianne Holmes creates the perfect contemporary cozy—with a smart and engaging heroine, a quirky and mysterious Berkshires town, and a cast of characters to rival any who live in Cabot Cove.”—Hank Phillippi Ryan, Agatha, Anthony, and Mary Higgins Clark award–winning author of the Jane Ryland series

“The clock ticks ever faster in this delightful debut mystery...The story, with a hunky barber, Ruth's childhood friends, and conflicts between the new town manager and the ‘old’ Orchard, winds up to a suspenseful and satisfying end.”—Edith Maxwell, Agatha-nominated and national bestselling author of the Local Foods Mysteries

Julianne Holmes is the author of Just Killing Time, the debut novel in the Clock Shop Mystery series and is the pseudonym for J. A. (Julie) Hennrikus, whose short stories have appeared in the award-winning Level Best Books. She serves on the boards of Sisters in Crime and Sisters in Crime New England, and is a member of Mystery Writers of America.
Loading...
or
Not Currently Available for Direct Purchase