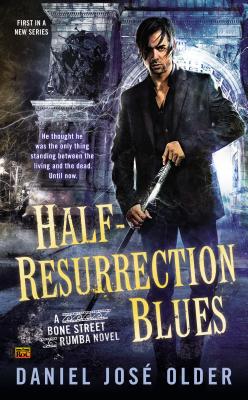 “Because I’m an inbetweener—and the only one anyone knows of at that—the dead turn to me when something is askew between them and the living. Usually, it’s something mundane like a suicide gone wrong or someone revived that shouldn’ta been.”

Carlos Delacruz is one of the New York Council of the Dead’s most unusual agents—an inbetweener, partially resurrected from a death he barely recalls suffering, after a life that’s missing from his memory. He thinks he is one of a kind—until he encounters other entities walking the fine line between life and death.

One inbetweener is a sorcerer. He’s summoned a horde of implike ngks capable of eliminating spirits, and they’re spreading through the city like a plague. They’ve already taken out some of NYCOD’s finest, leaving Carlos desperate to stop their master before he opens up the entrada to the Underworld—which would destroy the balance between the living and the dead.

But in uncovering this man’s identity, Carlos confronts the truth of his own life—and death.…

“A damn good read. All the best dark urban fantasies are about matters of life and death. Half-Resurrection Blues takes that to the limit. A hard-core, hard-driving fantasy, following the adventures of a most singular man who is both dead and alive and tasked with solving the problems of the dead and the living and everything in between. Except, of course, nothing is ever that simple. Daniel José Older takes aim at a whole bunch of familiar targets, and hits them hard in new and interesting ways.”—New York Times bestselling author Simon R. Green

“Older’s spectral noir is as real as fresh blood and as hard as its New York streets. A Lou Reed song sung with a knife to your throat.”—New York Times bestselling author Richard Kadrey

“Half-Resurrection Blues is so many things at once: a mystery, a suspense, a supernatural thriller. The world Older builds is familiar and alien, and it's so vividly imagined and rendered that the reader believes the contradictions, embraces them, loves this world of ghosts, demons, magic workers, and half-alive men and women. This is a fantastic beginning to what will surely be a fantastic series.”—National Book Award winner Jesmyn Ward

“Daniel Jose-Older is here to save your soul. But he might just terrorize it first. Half-Resurrection Blues is the first novel of a fabulous talent, one who mixes the spectral and the intellectual with skill. This book is smart and gripping, funny and insightful. It kicks in the door waving the literary .44. Be warned, this man is not playing.”—Victor LaValle, author of The Devil in Silver

Daniel José Older is the New York Times bestselling author of Last Shot as well as the Bone Street Rumba urban fantasy series, the young adult series The Shadowshaper Cypher, and the middle-grade historical fantasy Dactyl Hill Squad. He won the International Latino Book Award and has been nominated for the Kirkus Prize, the Mythopoeic Award, the Locus Award, the Andre Norton Award, and the World Fantasy Award. Shadowshaper was named one of Esquire’s 80 Books Every Person Should Read. In addition to being a writer, editor, and composer, he facilitates workshops on storytelling, music, and antioppression organizing at public schools, religious houses, and universities.
Loading...
or
Not Currently Available for Direct Purchase