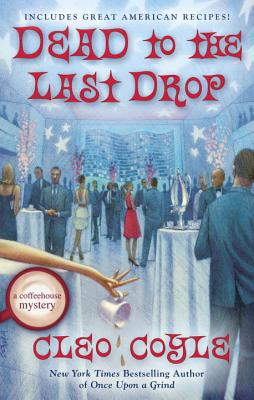 Dead to the Last Drop (A Coffeehouse Mystery #15)

From the New York Times bestselling author of Once Upon a Grind comes an exciting new installment in the "highly satisfying"* Coffeehouse Mystery series.

After the White House asks coffeehouse manager and master roaster Clare Cosi to consult on the coffee service for a Rose Garden Wedding, she discovers a historic pot was used as a CIA "dead drop" decades before. Now long-simmering secrets boil over, scalding Clare and the people around her...

Clare's visit to the nation's capital is off to a graceful start. Her octogenarian employer lands her a housesitting job in a charming Georgetown mansion, and she’s invited to work with a respected curator on the Smithsonian’s culinary salute to coffee in America.

Unfortunately, Clare's new Village Blend DC is struggling to earn a profit, until its second floor Jazz Space attracts a high-profile fan—the college-age daughter of the U.S. President. Clare's stock rises as the First Lady befriends her, but she soon learns a stark lesson: Washington can be murder.

First a stylish State Department employee suspiciously collapses in her coffeehouse. Then the President's daughter goes missing. Is she a runaway bride or is something more sinister in play? After another deadly twist, Clare is on the run with her NYPD detective boyfriend. Branded an enemy of the state, she must piece together clues and uncover the truth before her life, liberty, and pursuit of happiness come to a bitter end.

Praise For Dead to the Last Drop (A Coffeehouse Mystery #15)…

“[An] amusing combination of caffeine and chaos.”—Publishers Weekly

Cleo Coyle is a pseudonym for Alice Alfonsi, writing in collaboration with her husband, Marc Cerasini. Both are New York Times bestselling authors of the Coffeehouse Mysteries, now celebrating over ten years in print. Alice has worked as a journalist in Washington, D.C., and New York, and has written young adult and children’s books. A former magazine editor, Marc has authored espionage thrillers and nonfiction for adults and children. Alice and Marc are also bestselling media tie-in writers who have penned properties for Lucasfilm, NBC, Fox, Disney, Imagine, and MGM. They live and work in New York City, where they write independently and together, including the nationally bestselling Haunted Bookshop Mysteries.
Loading...
or
Not Currently Available for Direct Purchase