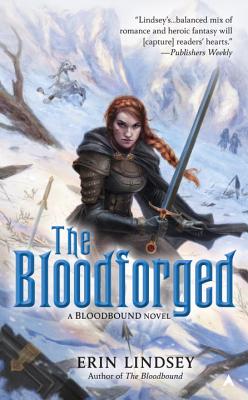 The Bloodforged (A Bloodbound Novel #2)

The epic saga that started in The Bloodbound continues…

As war between Alden and Oridia intensifies, King Erik must defend his kingdom from treachery and enemies on all sides—but the greatest danger lurks closer to home…

When the war began, Lady Alix Black played a minor role, scouting at the edge of the king’s retinue in relative anonymity. Though she’s once again facing an attacking Oridian force determined to destroy all she holds dear, she is now bodyguard to the king and wife to the prince.

Still, she is unprepared for what the revival of the war will mean. Erik is willing to take drastic measures to defend his domain, even if it means sending Prince Liam into a deadly web of intrigue and traveling into the perilous wild lands of Harram himself.

Only the biggest threat to the kingdom might be one that neither Alix nor Erik could have imagined, or prepared for…

Praise For The Bloodforged (A Bloodbound Novel #2)…

Praise for The Bloodbound

“Action and intrigue and flawed but likeable characters who, in complex political/personal situations, make hard decisions and stand by them.”—Tanya Huff, national bestselling author of The Future Falls

“Lindsey does a fine job of building tension…I genuinely liked the characters and want to read more about them.”—SFFWorld

“Sword and sorcery with a kickass heroine that would do any urban fantasy proud, The Bloodbound offers romance, intrigue, and a fast moving plot that will immerse readers in this new world…An effortless adventure that will sweep readers away.”—All Things Urban Fantasy

Erin Lindsey, author of The Bloodbound, is on a quest to write the perfect summer vacation novel, with just the right blend of action, heartbreak, and triumph. The Bloodbound series was her first effort. She lives in Brooklyn, NY with her husband a pair of half-domesticated cats.
Loading...
or
Not Currently Available for Direct Purchase