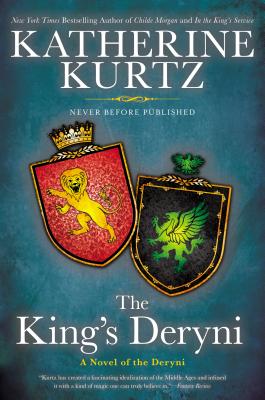 New York Times bestselling author Katherine Kurtz's novels of the Deryni have been hailed by Anne McCaffrey as -an incredible historical tapestry of a world that never was and of immensely vital people who ought to be.- Now Kurtz weaves a thrilling conclusion to the epic Childe Morgan trilogy, in which bonds of both magic and loyalty will be put to the ultimate test...
Alaric Morgan always knew his purpose in life--to stand alongside the king of Gwynedd. The old king knew that whichever of his sons succeeded to the throne would benefit from having a Deryni at his side. Alaric and the young Prince Brion Haldane were bound together by magic--a magic to be called upon when Brion was most in need.
Now eighteen, Brion has ascended to the throne and seven-year-old Alaric has come to court. Through the coming years, both will grow to manhood and come to realize their destinies. Brion will strive to solidify his power and position, seek out a bride to secure his legacy, and ultimately, when faced with an unbeatable foe, call upon Alaric to fulfill his oath.
Meanwhile, Alaric slowly learns the extent of his powers and how to use them, and will face the prejudice that many have against Deryni in its ugliest form. He will experience bittersweet first love, great personal loss, and the hard lessons one gains from both. And he will be there to unleash the full power of his Deryni magic at Brion's command.
For Alaric is--and always will be--the King's Deryni.

Praise For The King's Deryni…

Praise for the Novels of the Deryni

“Kurtz has created a fascinating idealization of the Middle Ages and infused it with a kind of magic one can truly believe in.”—Fantasy Review

“Kurtz’s fans will celebrate this continuation of In the King’s Service.”—Booklist

Katherine Kurtz has been writing fantasy for more than four decades and is author of the Novels of the Deryni, including Childe Morgan and In the King's Service. She is married and lives in Staunton, Virginia.
Loading...
or
Not Currently Available for Direct Purchase