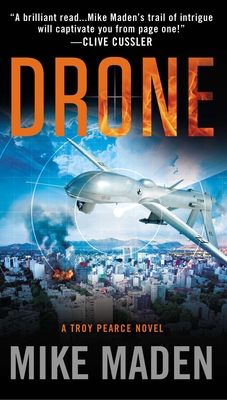 Troy Pearce is the CEO of Pearce Systems, a private security firm specializing in drone technologies. A former CIA SOG operative, Pearce used his intelligence and combat skills to hunt down America’s enemies—until he opted out, having seen too many friends sacrificed for political expediency. Now Pearce and his team choose which battles they will take on.

Pearce is done with the United States government for good, until a pair of drug cartel hit men assault a group of American students on American soil. New U.S. president Margaret Myers secretly authorizes Pearce Systems to locate and destroy the killers wherever they are. Now Pearce and his team are in a showdown with the hidden powers behind the El Paso attack—unleashing a host of unexpected repercussions.

“Mike Maden understands that sometimes the most lethal warriors are those just out of sight. Drone is action-packed, with cutting-edge technology and an unforgettable cast of characters.”—W.E.B. Griffin, #1 Wall Street Journal and New York Times bestselling author

Mike Maden is the author of the critically acclaimed Drone series and two novels in Tom Clancy’s #1 New York Times bestselling Jack Ryan Jr. series. He holds both a master’s and Ph.D. in political science from the University of California at Davis, specializing in international relations and comparative politics. He has lectured and consulted on the topics of war and the Middle East, among others. Maden has served as a political consultant and campaign manager in state and national elections, and hosted his own local weekly radio show for a year.
Loading...
or
Not Currently Available for Direct Purchase