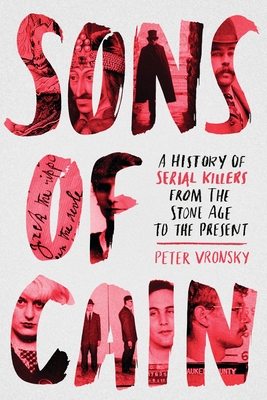 From the author of Serial Killers: The Method and Madness of Monsters comes an in-depth examination of sexual serial killers throughout human history, how they evolved, and why we are drawn to their horrifying crimes.

Before the term was coined in 1981, there were no "serial killers." There were only "monsters"--killers society first understood as werewolves, vampires, ghouls and witches or, later, Hitchcockian psychos.

In Sons of Cain--a book that fills the gap between dry academic studies and sensationalized true crime--investigative historian Peter Vronsky examines our understanding of serial killing from its prehistoric anthropological evolutionary dimensions in the pre-civilization era (c. 15,000 BC) to today. Delving further back into human history and deeper into the human psyche than Serial Killers--Vronsky's 2004 book, which has been called the definitive history of serial murder--he focuses strictly on sexual serial killers: thrill killers who engage in murder, rape, torture, cannibalism and necrophilia, as opposed to for-profit serial killers, including hit men, or "political" serial killers, like terrorists or genocidal murderers.

These sexual serial killers differ from all other serial killers in their motives and their foundations. They are uniquely human and--as popular culture has demonstrated--uniquely fascinating.

Peter Vronsky is the author of two bestselling true-crime histories: Serial Killers: The Method and Madness of Monsters and Female Serial Killers: How and Why Women Become Monsters. He is an investigative historian, author, filmmaker and new media designer. He holds a Ph.D. from the University of Toronto in criminal justice history and espionage in international relations.
Loading...
or support indie stores by buying on