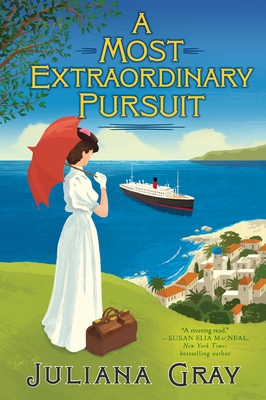 A Most Extraordinary Pursuit

Known for her original plots, deft characterization, and lyrical voice, Juliana Gray presents an extraordinary novel of an uncommon pursuit…

February, 1906. As the personal secretary of the recently departed Duke of Olympia—and a woman of scrupulous character—Miss Emmeline Rose Truelove never expected her duties to involve steaming through the Mediterranean on a private yacht, under the prodigal eye of one Lord Silverton, the most charmingly corrupt bachelor in London. But here they are, improperly bound on a quest to find the duke’s enigmatic heir, current whereabouts unknown.

An expert on anachronisms, Maximilian Haywood was last seen at an archaeological dig on the island of Crete. And from the moment Truelove and Silverton disembark, they are met with incidents of a suspicious nature: a ransacked flat, a murdered government employee, an assassination attempt. As they travel from port to port on Max’s trail, piecing together the strange events of the days before his disappearance, Truelove will discover the folly of her misconceptions—about the whims of the heart, the motives of men, and the nature of time itself…

Praise For A Most Extraordinary Pursuit…


Praise for the novels of Juliana Gray

“[Gray] truly is the newest incandescent star in the romance firmament.”—Booklist (starred review)

Juliana Gray is a pseudonym for New York Times bestselling author Beatriz Williams, the author of Along the Infinite Sea, Tiny Little Thing, The Secret Life of Violet Grant, A Hundred Summers and Overseas.
Loading...
or
Not Currently Available for Direct Purchase