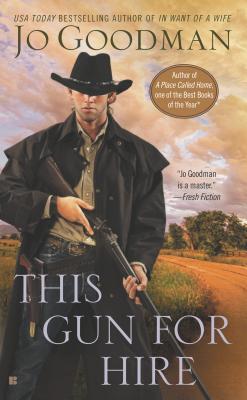 This Gun for Hire (A McKenna Novel #1)

"Perfectly crafted"—PW (starred review)
Jo Goodman, a premier writer of western romance and the author of In Want of a Wife, is back with a sensational new novel for fans of Linda Lael Miller and Joan Johnston.
He’s got a job to do…

Former army cavalryman Quill McKenna takes pride in protecting the most powerful man in Stonechurch, Colorado: Mr. Ramsey Stonechurch himself. But the mine owner has enemies, and after several threats on his life, mines, and family, Quill decides to hire someone to help guard the boss’s daughter. Only problem is the uncontrollable attraction he feels toward the fiery-haired woman who takes the job.
…but she’s a piece of work.
Calico Nash has more knowledge of scouting and shooting than cross-stitching, but she agrees to pose as Ann’s private tutor while protecting her. But between her growing attraction to Quill and the escalating threats against the Stonechurches, Calico will soon have a choice to make—hang on to her hard-won independence or put her faith in Quill to create the kind of happy ending she never imagined…


Praise For This Gun for Hire (A McKenna Novel #1)…

Praise for This Gun for Hire
"Danger, treachery, and clever subterfuge infuse this complex and multilayered story that boasts more than one despicable villain. VERDICT Nonstop, sometimes violent action; wicked and witty banter; tender, laughter-laced ardor; and a passel of vividly rendered characters will sweep readers deep into Goodman’s adventurous Wild West. Another addition to her growing canon of must-read historicals." --Library Journal

"Goodman...treks to 1888 Colorado for a perfectly crafted tale of a working partnership between two competent, self-reliant sharpshooters. Quill McKenna functions as both lawyer and bodyguard to powerful mine owner Ramsey Stonechurch. When Ramsey worries that his enemies might threaten his daughter, Ann, who has decided to stay at home rather than traveling for her advanced studies, he takes Quill’s suggestion to hire Katherine 'Calico' Nash, whom Quill met while she was taking down an abusive outlaw in a brothel. Calico guards Ann under the guise of being her academic tutor, and soon she captures Quill’s heart as well. The two mercenaries are brought together by similar goals on the right side of the law, high mutual regard, and a little bit of fate. Their romance is much more than incidental but doesn’t overshadow the excitement of the bigger story. Goodman balances the pair’s toughness and tenderness, independence and teamwork, and practicality and passion in a way that never lessens one in the service of the other; they become something greater together without ever compromising their individuality."—Publishers Weekly (starred review)

"When I am fortunate enough to have a great book in my hands, I typically read it straight through, even if it takes until dawn. This book I felt compelled to savor. I did not want it to end....As far as this reader is concerned, Jo Goodman can write a sequel featuring Quill and Calico and I would knock on the bookstore window at midnight to read it....I highly recommend this one." --All About Romance (Desert Isle Keeper Review)

"One of the premier Western romance writers, Goodman delivers a solid plot with engaging characters.  There's plenty of sexual tension, and from its rousing beginning to the powerful climax, there's enough adventure to satisfy fans."—RT Book Reviews

"The action is raring to go from the start. Setting: a brothel. Characters: one sensual woman, one bad villain and an innocent “I’m just here to relax” man. Quill’s confused and I’m confused but he’s determined to see what’s going to happen and willing to go with the flow and I’m laughing out loud as the scene unfolds. Add some whiskey, some rope, some guns, two villainous sidekicks, a little violence and justice is finally done. Calico has a wonderful, deadpan sense of humor and cuts Quill no slack at all. She’s also handy with a gun and not afraid to use it....At this point the story becomes a 'hold your breath' kind of book. It starts so well that I almost don’t want to keep reading it in case it slows or falters. On the other hand, I can’t not continue because it’s so good. It’s got wonderful, wry, sharp banter and intelligent people." --Dear Author

Jo Goodman is a USA Today bestselling author who has written multiple series, including the Hamilton Family series and the Thorne Brothers series. Jo lives in West Virginia.
Loading...
or
Not Currently Available for Direct Purchase