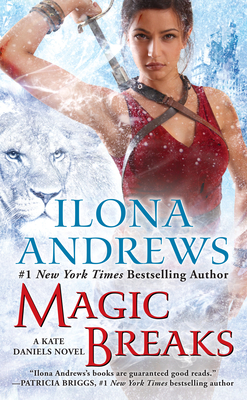 No matter how much the paranormal politics of Atlanta change, one thing always remains the same in this #1 New York Times bestselling series: if there’s trouble, Kate Daniels will be in the middle of it…

As the mate of the Beast Lord, Curran, former mercenary Kate Daniels has more responsibilities than it seems possible to juggle. Not only is she still struggling to keep her investigative business afloat, but she must now deal with the affairs of the Pack, including preparing her people for attack from Roland, a cruel, ancient being with godlike powers.

As Roland’s long shadow looms ever nearer, Kate is called to attend a gathering of leaders from Atlanta’s supernatural factions. When one of the Masters of the Dead is found murdered by a shapeshifter, Kate is given less than twenty-four hours to hunt down the killer. And this time, if she fails, she’ll find herself embroiled in a war that could destroy everything she holds dear...

“Kate is a great kick-ass heroine.”—Locus

“One of the brightest voices in urban fantasy...Ilona Andrews delivers only the best.”—Jeaniene Frost, New York Times bestselling author

“One of the best urban fantasy series ever written!”—RT Book Reviews

“Urban fantasy absolutely does not get much better than this.”—SF Signal

“I can’t think of another series so consistent, so well written, so full of wit and action and drama that always manages to give me exactly what I’m needing.”—Fiction Vixen

Ilona Andrews is the pseudonym for a husband-and-wife writing team, Gordon and Ilona. They currently reside in Texas with their two children and numerous dogs and cats. The couple are the #1 New York Times and USA Today bestselling authors of the Kate Daniels and Kate Daniels World novels as well as The Edge and Hidden Legacy series. They also write the Innkeeper Chronicles series, which they post as a free weekly serial. For a complete list of their books, fun extras, and Innkeeper installments, please visit their website at www.ilona-andrews.com.
Loading...
or support indie stores by buying on