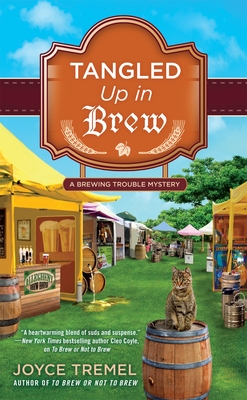 Tangled Up in Brew (A Brewing Trouble Mystery #2)

Another intoxicating mystery featuring brew pub owner Maxine “Max” O’Hara—from the author of To Brew or Not to Brew.

Brew pub owner Maxine “Max” O’Hara and her chef/boyfriend, Jake Lambert, are excited to be participating in the Three Rivers Brews and Burgers Festival. Max hopes to win the coveted Golden Stein for best craft beer—but even if she doesn’t, the festival will be great publicity for her Allegheny Brew House.

Or will it? When notoriously nasty food and beverage critic Reginald Mobley is drafted as a last-minute replacement judge, Max dreads a punishing review. Her fears are confirmed when Mobley literally spits out her beer, but things get even worse when the cranky critic drops dead right after trying one of Jake’s burgers. Now an ambitious new police detective is determined to pin Mobley’s murder on Max and Jake, who must pore over the clues to protect their freedom and reputations—and to find the self-appointed judge, jury, and executioner.

Praise For Tangled Up in Brew (A Brewing Trouble Mystery #2)…

Praise for To Brew or Not to Brew

“Joyce Tremel’s debut novel is cleverly developed, infused with fascinating details of craft brewing plus the very real flavor of Pittsburgh, and distilled into a unique and charming mystery. A delicious blend of strong characters and smooth delivery, To Brew or Not to Brew is sure to appeal to mystery readers and beer aficionados alike.”—Jennie Bentley, New York Times bestselling author of the Do-It-Yourself Mysteries

“A heartwarming blend of suds and suspense, featuring a determined heroine and her big Irish family. Tremel knows and loves her Pittsburgh setting, making the mystery all the more real and enjoyable.”—Cleo Coyle, New York Times bestselling author of the Coffeehouse Mysteries

“This charming debut novel stands out with a brewery setting that offers a unique twist on typical books within the genre. An assorted mix of characters provide a diverting dose of humor, flirtation and heart. Between the peek into the brewing industry and the mouthwatering food descriptions, readers may find themselves scurrying to their nearest pub even while the baffling case compels them to devour just one more chapter!”—RT Book Reviews (Top Pick)

Joyce Tremel is the author of To Brew or Not to Brew, the debut novel in the Brewing Trouble mystery series. For more than ten years, she was a police secretary. Her fiction has appeared in Mysterical-e, and her nonfiction has been published in the Pittsburgh Post-Gazette and the Pennsylvania Chiefs of Police magazine. She lives in a suburb of Pittsburgh with her husband and a spoiled cat.
Loading...
or support indie stores by buying on