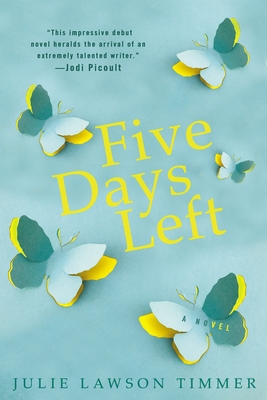 “This impressive debut novel heralds the arrival of an extremely talented writer.”—Jodi Picoult

Destined to be a book club favorite, a heart-wrenching debut about two people who must decide how much they’re willing to sacrifice for love.

Mara Nichols is a successful lawyer, devoted wife, and adoptive mother who has received a life-shattering diagnosis. Scott Coffman, a middle school teacher, has been fostering an eight-year-old boy while the boy’s mother serves a jail sentence. Scott and Mara both have five days left until they must say good-bye to the ones they love the most.

Through their stories, Julie Lawson Timmer explores the individual limits of human endurance and the power of relationships, and shows that sometimes loving someone means holding on, and sometimes it means letting go.

“A beautifully drawn study of what is at risk when you lose control of your own life. Unique, gripping, and viscerally moving—this impressive debut novel heralds the arrival of an extremely talented writer.”—Jodi Picoult, New York Times bestselling author of The Storyteller

“First-time author Julie Lawson Timmer hasn’t merely just penned a good novel; she leaps out of the chute here with this keeps-you-guessing story of two people who have a finite time—real or imagined—to spend with those they love. It’s that guessing part, the will-she-won’t-she on Mara’s behalf, and the frustration from Scott that kept me turning pages well into the night. …This is one of those winners that’ll be passed from reader to fan to book group and beyond. It’s a novel that people will buzz about awhile. Start it, and I think you’ll agree that Five Days Left is a right fine read.”—North Dallas Gazette

“A heart-wrenching drama about a world in which there are no easy answers. With an unflinching gaze, Julie Lawson Timmer explores what makes a family, what happens when bonds (familial and otherwise) are tested, and the relationships we forge that change our lives. This novel feels as true as life.”—Christina Baker Kline, #1 New York Times bestselling author of Orphan Train

“In her debut novel, told through the characters’ diary entries, the author does well staying realistic while telling a difficult tale.”—St. Louis Today

“Julie Lawson Timmer’s novel pulls no punches. It takes no prisoners. It is pure and honest. I sat down with this book after dinner, and, when I looked up, it was two a.m. and I had turned the last page. My only regret was that there weren’t a hundred more pages; Five Days Left is that compelling.”—Jacquelyn Mitchard, New York Times bestselling author of The Deep End of the Ocean

“A heart-wrenching story of how devastating and progressive Huntington’s disease is and its life-shattering impact on a vibrant and ambitious young woman who is a wife, mother, daughter, friend, and lawyer. It brings home the reality of this all-consuming disease and the impact it has not only on Mara, but on all of the people she loves and who love her. It’s a beautiful story that intertwines love and loyalty and is thought-provoking, yet disturbing, as the reader tries to come to terms with Mara’s decision for herself and her family.”—Laura Schroff, New York Times bestselling author of An Invisible Thread

“Timmer’s emotional debut should come with a box of tissues....The characters are so affecting it’s tough to make it to Day 5. An authentic and powerful story.”—Kirkus Reviews (starred review)

“A stunning debut about the impossible things we do for love. Heartbreaking yet uplifting, Five Days Left is a book I won't ever forget.”—Sarah Pekkanen, internationally bestselling author of Catching Air

“Like Joshilyn Jackson, Timmer, in her impressive debut novel, shows a facility for creating authentic characters dealing with heart-wrenching dilemmas….A compelling read and a good choice for book clubs.” —Booklist

“Affecting [and] heart-wrenching…Timmer handles delicate, controversial issues with deep insight into human nature, and ultimately renders a story that will stay with readers long after they reach the last page.”—Amy Hatvany, author of Safe with Me

“Timmer’s novel is a heartbreaker, but it is also a stirring debut.” —BookPage

“A lesson in compassion and grace.  An emotional journey that left me weeping, humbled, and ultimately hopeful.” —Lori Nelson Spielman, author of The Life List

“In her beautiful, brave debut, Julie Lawson Timmer examines the limits of love and resilience—as well as the heartbreaking decisions parents must sometimes make. With a fresh revelation on every page, this novel is a gift.”—Camille Noe Pagán, author of The Art of Forgetting

Julie Lawson Timmer grew up in Canada and earned a bachelor’s degree from McMaster University and a law degree from Southern Methodist University. She lives in Ann Arbor with her husband and children and is a lawyer. This is her first novel; she is currently at work on her second.