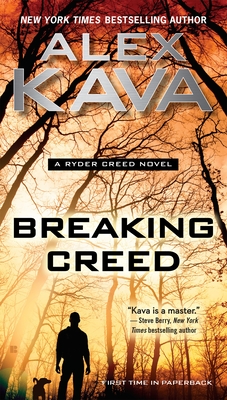 Ryder Creed and his dogs have been making national headlines. They’ve intercepted several major drug stashes smuggled through Atlanta’s airport. But their newfound celebrity has also garnered some unwanted attention.

When Creed and one of his dogs are called in to search a commercial fishing vessel off the coast of Pensacola Beach, they discover a secret compartment. But the Colombian cartel’s latest shipment isn’t drugs. It’s human...

Meanwhile, FBI agent Maggie O’Dell is investigating a series of murders she suspects to be the work of a brutal assassin. By the time she uncovers a hit list with Creed’s name on it, it might be too late to help him. For someone is already on the way...

“It simply blew me away...For any lover of nail-biting suspense, it's a book you'll not be able to put down.”—James Rollins

More Praise for the novels of Alex Kava

“Maggie…can give Patricia Cornwell’s Kay Scarpetta a run for her money.”—Booklist

“Guaranteed to keep you up all night.”—Lisa Gardner

Alex Kava is the New York Times bestselling author of the critically acclaimed series featuring former Marine Ryder Creed and his K9 dogs, and the international bestselling Maggie O'Dell series. Her novels have been published in more than thirty countries around the world. She is a member of the International Thriller Writers and divides her time between Omaha, Nebraska, and Pensacola, Florida.
Loading...
or support indie stores by buying on