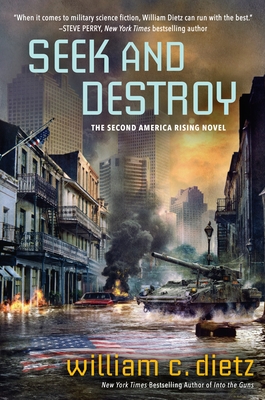 As people fight to survive the aftereffects of more than a dozen meteor strikes, a group of wealthy individuals conspires to rebuild the United States as a corporate entity called the New Confederacy, where the bottom line is law. As a second civil war rages, with families fighting against families on opposite sides, Union president Samuel T. Sloan battles to keep the country whole.

To help in the fight for unity, Union Army captain Robin “Mac” Macintyre and her crew of Stryker vehicles are sent after the ruthless “warlord of warlords,” an ex–Green Beret who rules a large swath of the West. But defeating him will be even more difficult than she thought. The warlord is receiving military assistance from Mac’s sister—and rival—Confederate major Victoria Macintyre. And when the siblings come together in the war-torn streets of New Orleans, only one of them will walk away.

Praise for Into the Guns

“William C. Dietz has produced an action packed, barnburner of a novel…This is a big blockbuster, big budget novel and the action is relentless…Into the Guns is hard military sci-fi in a post-catylyst American wasteland at its explosive best.”—The Bookbeard’s Blog

“Fans of military science fiction will have another strong series to look forward to…Dietz takes readers on an emotional roller coaster.”—Amazing Stories

“An interesting and delightful read, with a good mix of action, intrigue, and the occasional bit of levity…highly recommended.”—Game Vortex

“Dietz is a must-read for all military SF fans…If you enjoy an action story, strong military SF, or a good near-future Armageddon novel, be sure to read Into the Guns…you will be longing for the next volume as you finish the last page.”—Galaxy’s Edge Magazine

“Into the Guns doesn’t waste a second getting going right out of the gate...By the time you get to the last page, you’re out of breath. But things are only getting started.”—Pulp Fiction Reviews

“Dietz’s expertise in matters of mayhem is second to none.”—The Oregonian

William C. Dietz is the New York Times bestselling author of more than forty novels, some of which have been translated into German, Russian, and Japanese. His works include the America Rising novels, the Legion of the Damned® novels, and the Mutant Files series.
Loading...
or
Not Currently Available for Direct Purchase