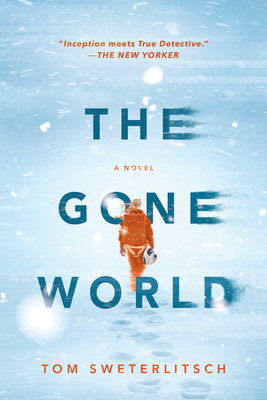 Inception meets True Detective in this science fiction thriller of spellbinding tension and staggering scope that follows a special agent into a savage murder case with grave implications for the fate of mankind....

Praise for The Gone World
One of the A.V. Club's Top 10 Books of the Year 2018
One of BookPage's Best Science Fiction and Fantasy of 2018

“The Gone World has already created quite a stir....The book probes questions about consciousness and crime that call to mind, among others, True Detective and 12 Monkeys.”—EW.com

“I like to be freaked out and mystified simultaneously. The Gone World, a gory time-travel thriller, does both in surprising ways....Inception meets True Detective, but it also contains elements of Solaris, Interstellar, Twin Peaks, Minority Report, and even Stargate. To all this, it adds some innovative time-travel shenanigans.”—The New Yorker “Page-Turner”

“Time travel is a classic science fiction plot element, but it’s rarely used so well as in Tom Sweterlitsch’s The Gone World...Proof that superb world building isn’t only the domain of extensive series.”—The A.V. Club

“A complicated, dazzling novel that keeps the reader hooked until the last pages...In many ways, it feels like it blends the supernatural and cosmic elements from True Detective, and the alternate universe elements of Fringe.” —The Verge

“As if [The Gone World did not have] a thrilling enough premise, Sweterlitsch stirs an intriguing end-of-the-world scenario into the mix...How the murder inquiry and the enigma of the terminal event are linked is just one of the many enjoyable aspects of this dark, page-turning SF thriller; another is the character of Moss... She is a resilient, vulnerable, and likable protagonist.”—The Guardian

“Sweterlitsch has crafted a powerful and compelling protagonist in Shannon Moss...The Gone World displays the mesmerizing power of rich speculative fiction, which drives the investigation forward (and backward) in time. Transporting readers to increasingly hostile timelines, Sweterlitsch delivers visceral and unflinching action in this dynamic merger of murder mystery and futuristic vision.”—BookPage

“Sweterlitsch offers a highly engaging—and deeply human—story informed by hard science and a refreshing sensitivity to trauma and disability...The Gone World is as unsettling as it is unforgettable.”—ShelfAwareness

“Billed as Inception meets True Detective, this scifi thriller follows a secret agent within the NCIS as she investigates a strange murder and a related missing-person case that...could possibly bring about the end of life as we know it.”—Io9

“Amazing...combines science fiction and thriller with classic crime noir, time travel, existentialism, philosophy, religion and end-of-the-world scenarios, all strung together in the style of the best literary fiction you will find out there today....Tom Sweterlitsch has created an all-time original story that is both genre-breaking and trendsetting.”—Bookreporter.com

“[An] investigation into the gruesome murder of a Navy SEAL’s family takes some science fictional turns...Sweterlitsch juggles all of these balls masterfully. His Moss feels fully realized and the plot is propulsive.”—Locus

“Thought-provoking and entertaining in equal measure. The way the future is presented, as one possibility of many, is good, solid theory and the author describes it in remarkable clarity...The character of Moss shines through.” —SF Book Reviews

Tom Sweterlitsch is the author of The Gone World and Tomorrow and Tomorrow. He has a Master's Degree in Literary and Cultural Theory from Carnegie Mellon and worked for twelve years at the Carnegie Library for the Blind and Physically Handicapped. He lives in Pittsburgh with his wife and daughter.
Loading...
or support indie stores by buying on