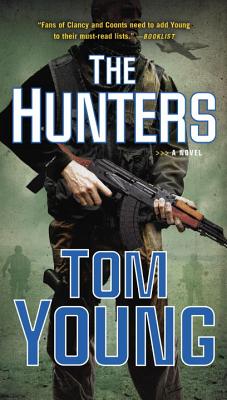 The Hunters (A Parson and Gold Novel #6)

A perilous aid mission into Somalia. An Al Shabaab leader intent on stopping it. A Hollywood actress and activist arriving to make a documentary in one of the most dangerous places on earth. This isn’t going to end well.
Khatar. It is the Somali word for “dangerous,” and it is one that Colonel Michael Parson has heard all too often on his present mission. His friend Sophia Gold has talked him into taking leave from the Air Force to fly relief supplies into Somalia in an antique DC-3 cargo plane. But even Parson doesn’t know just how khatar this trip will turn out to be.

Praise For The Hunters (A Parson and Gold Novel #6)…

Praise for Tom Young
“The Warriors is a triumph of the fiction of contemporary warfare. Reading Tom Young gives you the idea of what actual modern combat might be like, not what someone may imagine it to be. Young’s plots create a lot of dramatic heat. The novel builds into a series of bombings and firefights as well described as anything in the thrillers of Frederick Forsyth or Tom Clancy.” —Alan Cheuse, The Dallas Morning News

“A realistic portrayal of contemporary military action. Rather than relying on crude violence and gratuitous action scenes, Young takes the time to offer the reader a window into the deliberative process of these military men and women of action. There are, nonetheless, hearty helpings of realistic shootouts and fistfights.” —Kirkus Reviews

“Young has a gift for allowing the reader to experience the emotional aspects of being a soldier and for describing the desolation of the desert countries our troops are patrolling. Military-thriller fans of Clancy and Coonts need to add Young to their must-read lists.” —Booklist (starred review)

Praise for The Hunters
“Young does a fine job balancing the perspectives of the hero and the young Somali caught in a battle for survival with the religious extremists. There are plenty of vividly described battle scenes and close calls.” —Library Journal
“Stunning . . .Young writes very fine thrillers set in war-torn areas, and his background brings an authenticity to the proceedings that helps lift the stories above others of its kind. Military-fiction fans should have Young’s books on their TBR piles.” —Booklist

Tom Young retired from the Air National Guard in 2013 at the rank of senior master sergeant. He served more than twenty years as a flight engineer on the C-130 Hercules and the C-5 Galaxy, logging nearly 5,000 hours of flight time. His career included service in Afghanistan, Iraq, Bosnia, Kosovo, the horn of Africa, and elsewhere. Military honors include the Meritorious Service Medal, three Air Medals, three Aerial Achievement Medals, and the Air Force Combat Action Medal.
Young holds degrees from the University of North Carolina at Chapel Hill, and studied writing there and at the Sewanee Writers’ Conference, among other places. Besides his five previous novels The Mullah’s Storm, Silent Enemy, The Renegades, The Warriors, and Sand and Fire, he is also the author of the Sand and Fire eBook special Phantom Fury, and the oral history The Speed of Heat: An Airlift Wing at War in Iraq and Afghanistan. Young also contributed to the anthology Operation Homecoming, edited by Andrew Carroll. He lives in Alexandria, Virginia.
Loading...
or
Not Currently Available for Direct Purchase