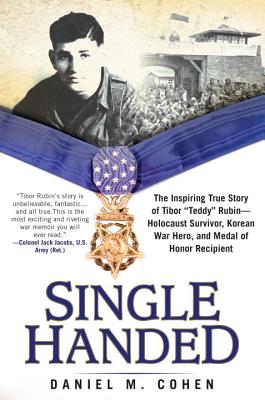 From a World War II concentration camp to the Korean War to the White House, this is the incredible story of Tibor “Teddy” Rubin, the only Holocaust survivor ever to receive a Medal of Honor...

In 1944, a thirteen-year-old Hungarian boy named Tibor Rubin was captured by the Nazis and sent to the notorious Mauthausen concentration camp. The teenager endured its horrors for more than a year. After surviving the Holocaust, he arrived penniless in America, barely speaking English.

In 1950, Tibor volunteered for service in the Korean War. After acts of heroism that included single-handedly defending a hill against an onslaught of enemy soldiers, braving sniper fire to rescue a wounded comrade, and commandeering a machine gun after its crew was killed, he was captured. As a POW, Tibor called on his experience in Mauthausen to help fellow GIs survive two and half years of captivity.

Tibor returned from Korea in 1953, but it wasn’t until 2005—at age 76—that he was invited to the White House, where he received the Medal of Honor from President George W. Bush. It had taken over half a century for Tibor’s adopted homeland to recognize this Jewish immigrant for acts of valor that went “beyond the call of duty.” But when it did, the former Hungarian refugee became the only survivor of the Holocaust to have earned America’s highest military distinction.

Drawing on eyewitness accounts and extensive interviews, author Daniel M. Cohen presents the inspiring story of Tibor “Teddy” Rubin for the first time in its entirety and gives us a stirring portrait of a true hero.

“Tibor Rubin’s story is unbelievable, fantastic…and all true. This is the most exciting and riveting war memoir you will ever read.” —Jack Jacobs, Colonel, U.S. Army (Retired)

“Daniel Cohen has captured the essence of unblemished character and raw courage during the Holocaust and the Korean War, demonstrating that heroism outlasts prejudice.  We are in Tibor ‘Teddy’ Rubin’s debt for his distinguished service under the most challenging conditions.  We are in Cohen’s debt for making Rubin’s story accessible to the American public.” —Colonel Cole C. Kingseed, coauthor of Beyond Band of Brothers and author of Conversations with Major Dick Winters

“Captivating from page one, Single-Handed is an epic survival story layered with meaning and told with ferocity and honesty. Author Daniel M. Cohen details the life of Medal of Honor recipient Corporal Tibor Rubin, an unlikely hero who embodied faith, charity, and valor in the most horrific of conditions. Rubin’s life story offers a narrative of the truly extraordinary. It is vastly important in its telling, finally uncovered like a long-lost gemstone.”—Marcus Brotherton, bestselling author of Shifty’s War

“All American heroes are not homegrown. Meet Tibor Rubin, a Hungarian Jew who survives the hell of a Nazi death camp, emigrates to America, joins the U.S. Army where, despite virulent anti-Semitism, he serves in the Korean War, earning the Congressional Medal of Honor for his selfless valor in defense of his comrades and his adopted nation. A real page-turner.”—Larry Alexander, national bestselling author of Biggest Brother and coauthor of A Higher Call

DANIEL M. COHEN has worked as a filmmaker, journalist, and film critic for over thirty years. He has written and directed award-winning independent features and continues to work as a film critic. He lives in Santa Monica, California.
Loading...
or
Not Currently Available for Direct Purchase